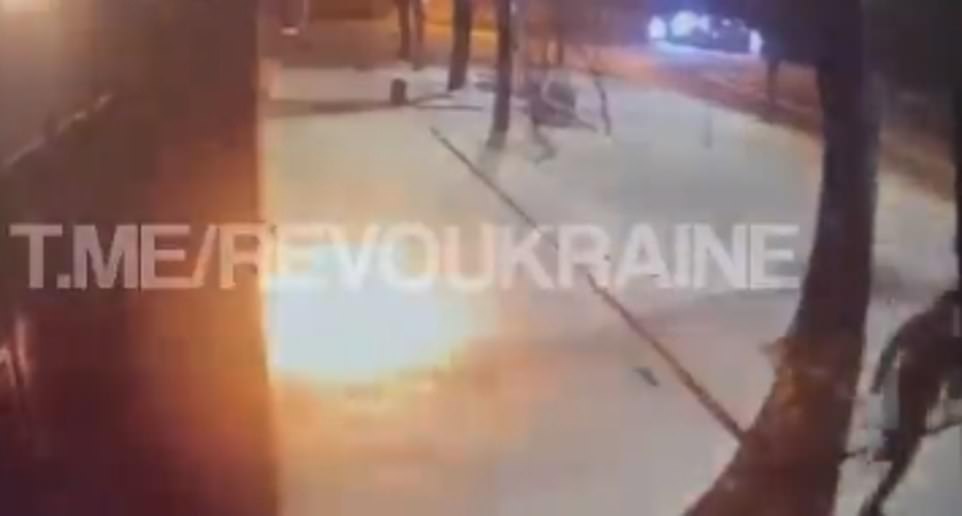 Russia has accused Ukraine of an ‘act of terrorism’ over a Molotov cocktail attack on its embassy in the city of Lviv amid soaring tensions after satellites revealed Vladimir Putin has moved hundreds of tanks to the border.

The Kremlin said Friday that an attacker hurled a petrol bomb at the Russian consulate in the eastern Ukrainian city, formally protesting and demanding apologies from Kiev.

Footage of the incident shows a man throwing a Molotov which appears to bounce off the walls of the building before exploding on the ground. The attacker then sprints away.

Ukrainian police in Lviv said they had launched an investigation over the incident, which they referred to as ‘hooliganism’.

It comes as newly-published pictures dated December 13 show a new brigade-level unit comprised of several hundred armoured vehicles massed at a Russian base in Bakhchysarai, Crimea, around 110 miles from the Ukrainian border.

An October 7 satellite image of the same garrison showed the base was half empty, showing that the Kremlin has continued to build up its forces near Ukraine in recent weeks while pressing the United States for talks over security guarantees.

More Maxar Technologies images taken yesterday from the Crimea show an entire Russian battle group taking part in military exercises at the Opuk training area, between 150 and 160 miles from the border.

Tensions along Europe’s eastern border have been simmering since Russian President Vladimir Putin annexed Crimea back in 2014, and have been threatening to boil over ever since Moscow began massing forces in the region starting in October after an earlier brief buildup in April this year.

Putin, speaking at his annual end-of-year conference on Thursday, said that Russia wanted to avoid conflict, but needed an ‘immediate’ response from the United States and its allies to its demands for security guarantees.