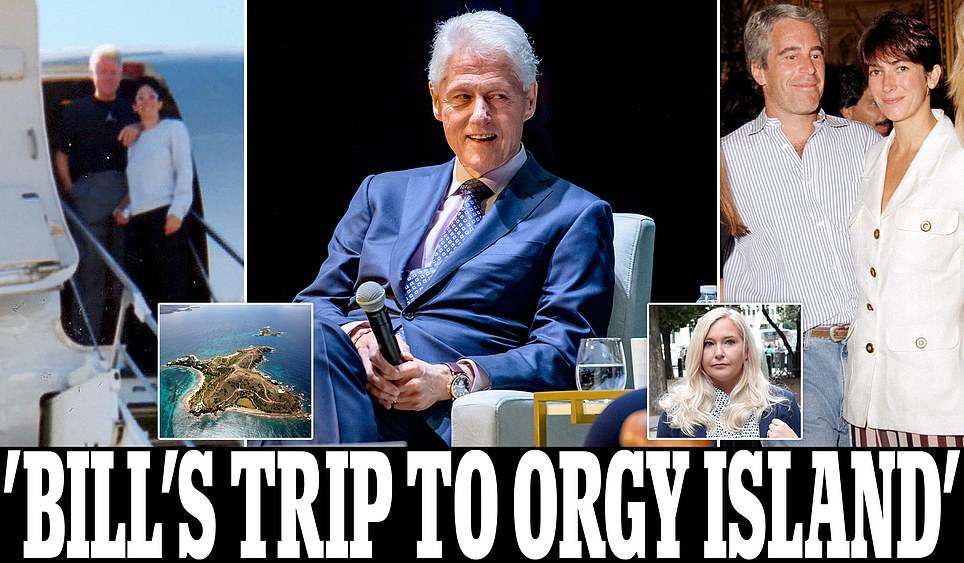 In nine-year-old testimony that was only made public for the first time on Thursday, Roberts said Clinton visited the private Caribbean island of Little Saint James some time after his presidency ended in 2001.

Roberts told investigators that she, Epstein’s ex-girlfriend Ghislaine Maxwell and two other ‘young girls’ from New York were also on the island at the time.

When Roberts, who now goes by the name Guiffre, asked Epstein what Clinton was doing on the island, she claims he laughed and said: ‘He owes me a favor.’

‘He never told me what favors they were. I never knew. I didn’t know if he was serious. It was just a joke,’ she said.

The former president has repeatedly denied ever visiting Epstein’s island in the Caribbean. He has also always maintained he knew nothing of Epstein’s abuse of young girls.

His spokesman said on Friday that Clinton has ‘never been to Little St. James Island’. He added: ‘He’d not spoken to Epstein in well over a decade. Well before his terrible crimes came to light.

Roberts gave the testimony to lawyers back in 2011, which was used as evidence during a 2015 defamation case that she brought against Epstein’s alleged madam, Ghislaine Maxwell. Maxwell, who gave hours of her own testimony to investigators, eventually settled the case out of court in 2017.

Roberts had claimed in the lawsuit and other litigation that Maxwell recruited her in 2000 to be a sexual servant to Epstein. She said the couple subsequently pressured her into having sex with numerous rich or notable men, including Prince Andrew, US politicians, wealthy entrepreneurs, a famous scientist and fashion designer.

Maxwell, and all of the accused men, have denied those allegations for years.

Maxwell’s lawyers have long fought to keep the documents under seal, claiming they could harm the reputations of high-profile people.

The seal was partially lifted by a judge on Thursday following Maxwell’s arrest on sex crimes charges and perjury earlier this month.

In the documents, Roberts made six references to Clinton when she was being interviewed by investigators in April 2011.

She recalled asking Epstein at the time what the former president was doing there on his private island.

‘You know, I remember asking Jeffrey what’s Bill Clinton doing here king of thing, and he laughed it off and said well he owes me a favor. He never told me what favors they were. I never knew. I didn’t know if he was serious. It was just a joke,’ she said.

‘He told me a long time ago that everyone owes him favors. They’re all in each other’s pockets.’

When asked where Clinton was, Roberts told the investigators: ‘On the island.’

She claimed that Maxwell and two ‘young girls’ from New York were also on the island when Clinton visited with Epstein.

When investigators asked if all of them were staying on the island ‘including Bill Clinton’, Roberts replied: ‘That’s correct. He had about 4 or 5 different villas on his island separate from the main house and we all stayed in the villas.