Boston Celtics Legend Bill Russell – ‘the Most Prolific Winner in American Sports’ – Dies at 88: He Won 11 NBA Titles, Two NCAA Championships, an Olympic Gold Medal, and Became First the Black Coach in Major US Sports in 1966 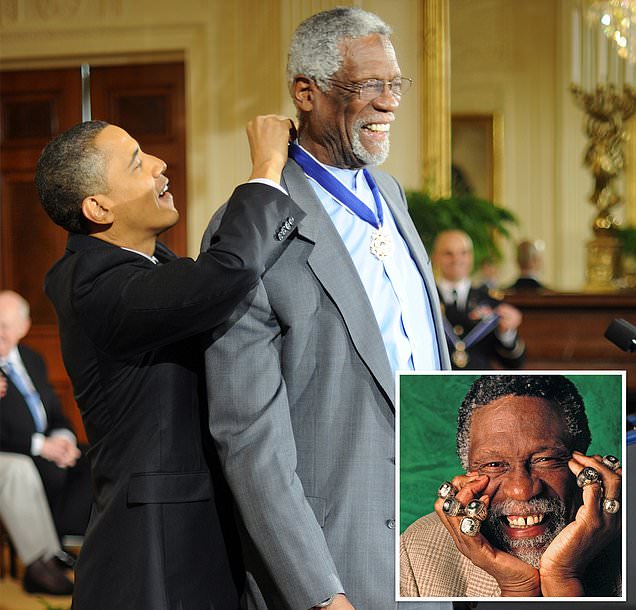 Boston Celtics legend Bill Russell, an 11-time NBA champion, has died at the age of 88.

Russell’s 11 titles with the Celtics came between 1956 and 1969 in one of the sport’s most dominant eras. He also won an Olympic gold medal in Melbourne with the United States in 1956 and two NCAA titles at San Francisco in 1955 and 56, success that paved the way for him to become a five-time NBA MVP and 12-time All-Star.

His family said in a statement on Sunday: ‘It is with a very heavy heart we would like to pass along to all of Bill’s friends, fans & followers: Bill Russell, the most prolific winner in American sports history, passed away peacefully today at age 88, with his wife Jeannine, by his side. Arrangements for his memorial service will be announced soon.’

In 2011, Russell was awarded the Presidential Medal of Freedom – the highest civilian honor in the United States.

In addition to his civil rights work, he’s considered one of the greatest winners in US sports history and the greatest defensive player in NBA history.

While playing for Boston, he experienced significant racism and ultimately decided to have his jersey retired in a private ceremony rather than sharing the moment with fans.