Lions Are Pictured in Tiny Cages Waiting to Be Slaughtered for Use in Chinese Medicine: 27 Animals’ Skeletal Remains Are Discovered in South African Police Raid 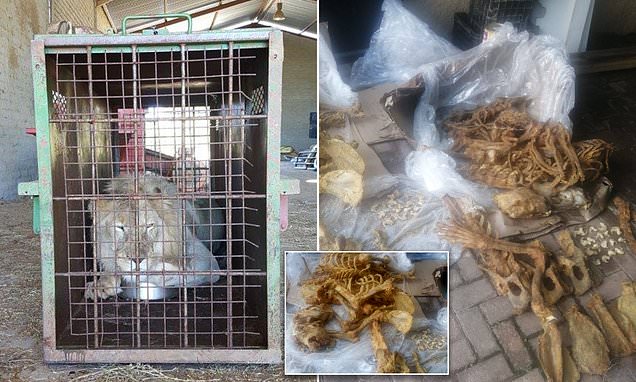 These images show the bones of 27 lions slaughtered to be sold to the Far East for use in medicines or to be made into trinkets.

South African police swooped on a house after a tip-off that the 7,000 bones had been specially dried ready to be smuggled abroad.

The remains, made up of both lions and lionesses, are worth £4,500 each on the black market and are normally spirited out of the country on cargo flights.

Tory Peer Lord Ashcroft has long campaigned against the sickening trade and his in-depth investigations have shown over 3,000 farms in South Africa are involved in the trade.

Each year 800 lion skeletons can legally be sold and shipped abroad but that is not enough to feed the demand for the bones which are highly prized in China and the Far East.

A spokesman for the elite Hawks Serious and Organised Crimes Unit said that acting on a tip off they swooped on an address in Kempton Park, Krugersdorp near Johannesburg.

Hawks spokesperson Captain Ndivhuwo Mulamu said: ‘We have arrested a 37-year-old man who was at the address who will appear at Krugersdorp Magistrates Court on Monday morning.

‘The raid was at a private address in an intelligence led operation on Friday’ she said.

A source close to the investigation said: ‘It was very macabre indeed and we believe that at least 27 complete skeletons at least are there and the final figure may be even be a little higher.