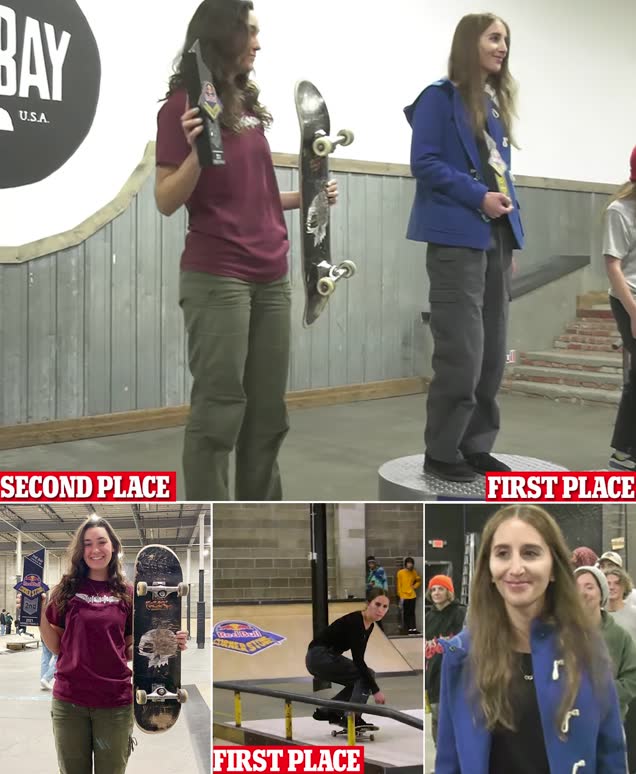 Footage taken from the 2021 final of the event – which sees top skaters from the Midwest compete at the region’s best indoor skateparks – shows Gallagher gladly accepting her trophy at the top of the stage, as the second- and third-place winners stand on.

The victory at the final in Lincoln, Nebraska, held in December, saw Gallagher awarded $5,000, after sealing wins in both the event’s main competition and its ‘Best Trick’ contest.

Now, however, runner-up Taylor Silverman – who was awarded just over half that sum – says that award should be hers.

‘I am a female athlete,’ Silverman, a 27-year-old professional skater from Kalamazoo, Michigan, wrote in a scathing post published to Instagram Tuesday, in which she slammed Red Bull for allowing a trans woman complete in an all-female competition.

‘I have been skateboarding for eleven years and competing for several years. I have been in three different contests with trans women, two of which I placed second,’ Silverman said

‘At the last contest series I did for Redbull, I placed second.’

Silverman, who says she has been skateboarding for 11 years, proceeded to break down the winnings split amongst the three contestants whom had medaled, while appealing to Red Bull to rescind Gallagher’s win.