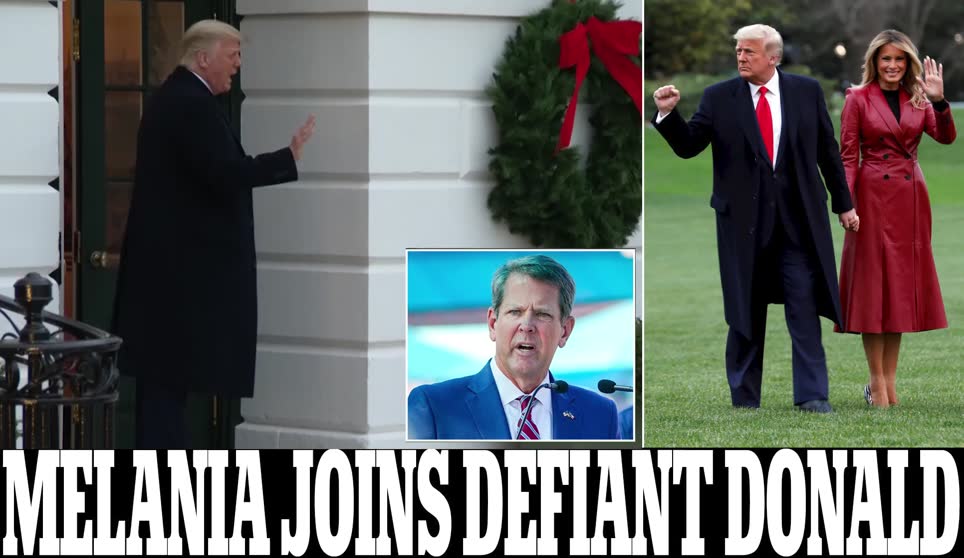 Donald Trump and Melania Trump have left the White House to head to a Senate runoff rally in Georgia, hours after Republican Governor Brian Kemp rejected the president’s plea to help overturn Joe Biden’s win in the state.

The president and First Lady waved to supporters as they walked along the South Lawn of the White House and boarded Marine One for a short trip to Andrews Air Force Base in Maryland Saturday afternoon.

Melania, who was sporting a long red leather coat and zebra print heels, smiled as they walked across the lawn while Trump bore a more sullen expression as his call with Kemp didn’t go as planned earlier in the day.

The First couple then arrived at Joint Base Andrews in Maryland and boarded Air Force One to continue their journey to Valdosta where Trump will throw his support behind David Perdue and Kelly Loeffler in Georgia’s Senate runoffs.

The trip to Georgia came after Trump personally called the governor Saturday morning to pressure him to overturn Biden’s win and to get him to order another signature audit of votes in the state.

The president asked Kemp to call a special session of the state legislature to flip the election result in his favor and appoint electoral college voters that will back him instead of the President-elect.

This marks the latest in a long line of attempts from Trump to claw back victory in Georgia after the state flipped blue for the first time in 18 years.

A source told the Washington Post about the conversation in which they said Kemp stood his ground and ‘declined the entreaty from Trump’.

Trump took to Twitter around midday – presumably not long after the phone call – to claim he would ‘easily and quickly’ win Georgia if Kemp permitted a ‘simple signature verification’ and hitting out at the governor and Secretary of State Brad Raffensperger asking ‘why are these two ‘Republicans’ saying no?’

On Thursday, Kemp called for a signature audit of Georgia votes for the third time and claimed it would be ‘simple’ to do while saying the power to carry one out lies with Raffensperger.

Signature verification was already carried out on absentee ballot envelopes in the state before the votes were counted and it would now be impossible to trace an individual ballot back to the envelope it came in.

Trump is seeking to have mail-in ballots thrown out across the state as he continues to push unfounded claims of widespread election fraud and refuses to concede to the President-elect.

His legal efforts were dealt a monumental blow Friday when judges in six states rejected his team’s election fraud appeals.

His latest attack on the election process comes as he heads to Georgia for a rally Saturday night where he has vowed to get behind the two GOP Senate candidates Perdue and Loeffler to try to prevent the party losing control of the Senate.

This comes 24 hours after former President Barack Obama headed up a virtual rally in support of the two Democrat challengers Raphael Warnock and Jon Ossoff.