Kanye West and Jim Brown Visit President Trump in the White House: Kanye Says Trump Is ‘on His Hero’s Journey’ and Goes on 10-Minute Speech in the Oval Office

Kanye West went on an extended rant in the Oval Office on Wednesday at the beginning of a working lunch with President Trump, where he dropped the F bomb, talked about his Bipolar Disorder diagnosis, pounded on the Resolute Desk and gave the president a hug.

West said that he has come to understand that ‘bravery helps you beat this game called life’ and that he misdiagnosed with a mental health disease when he was really just sleep deprived in a 10-minute speech, followed by nearly 10 minutes of questions, in which he labeled himself a ‘crazy motherf***er,’ called the amendment that ended slavery a ‘trap door’ and said it should be abolished and joked about running for president in 2024.

‘They tried to scare me to not wear this hat, my own friends, but this hat it gives me, it gives me power,’ he asserted. ‘You know, my dad and my mom separated, so I didn’t have a lot of male energy in my home. And also, I’m married to a family that, you know – not a lot of male energy going on. It’s beautiful though,’ he said, breaking out into nervous laughter as he spoke about his wife Kim Kardashian and her family.

The rapper said that he loves Hillary Clinton but the slogan ‘I’m with her’ didn’t empower him to be the kind of man or father he felt his son deserved.

‘I love Hillary. I love everyone, right? But the campaign “I’m with her” just didn’t make me feel, as a guy that didn’t get to see my dad all the time, like a guy that could play catch with his son,’ he said. ‘It was something about, when I put this hat on, it made me feel like Superman. That’s my favorite super hero.’

He revealed that Trump had a Superman cape made for him. ‘No bulls***t,’ he added, advising networks to slap on a five-second delay. ‘You gave me the heart to go to Adidas,’ he told Trump, referring to his Yeezy shoe deal.

When he was finished with the 10-minute speech the president said it was ‘amazing’ and that the impromptu remarks were ‘pretty impressive.’ 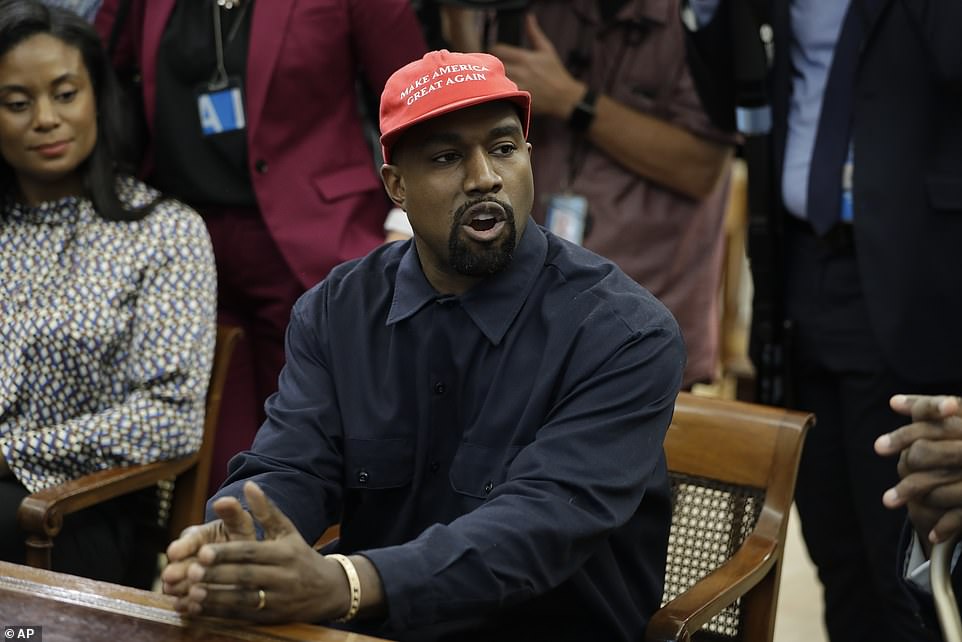 ‘Genius’: The president praised Kanye in a Fox News interview earlier in the morning, then greeted Kanye in the Oval Office 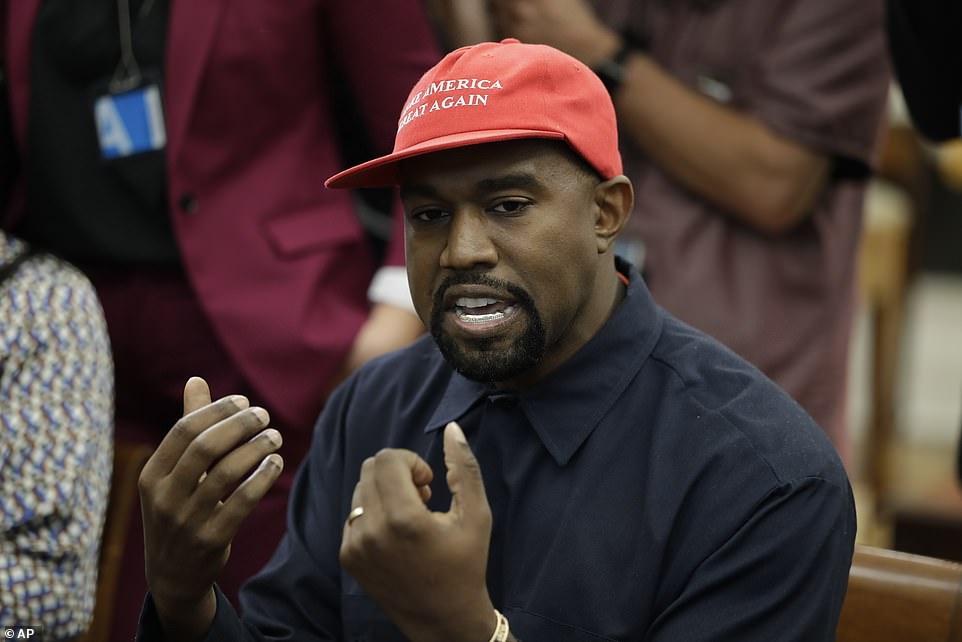 MAGA: Kanye has made wearing the president’s Make America Great Again slogan his recent trademark – earning criticism from some quarters 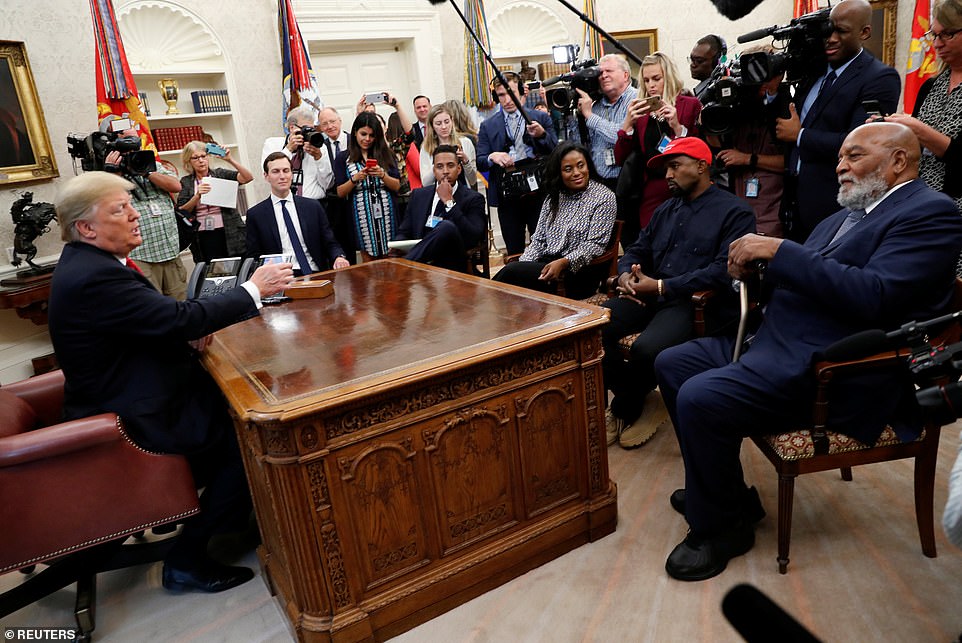 Sit-down: Jim Brown, the NFL Hall of Famer, was also part of the talks, which center of African-American employment, prison reform and violence in Chicago, the White House said 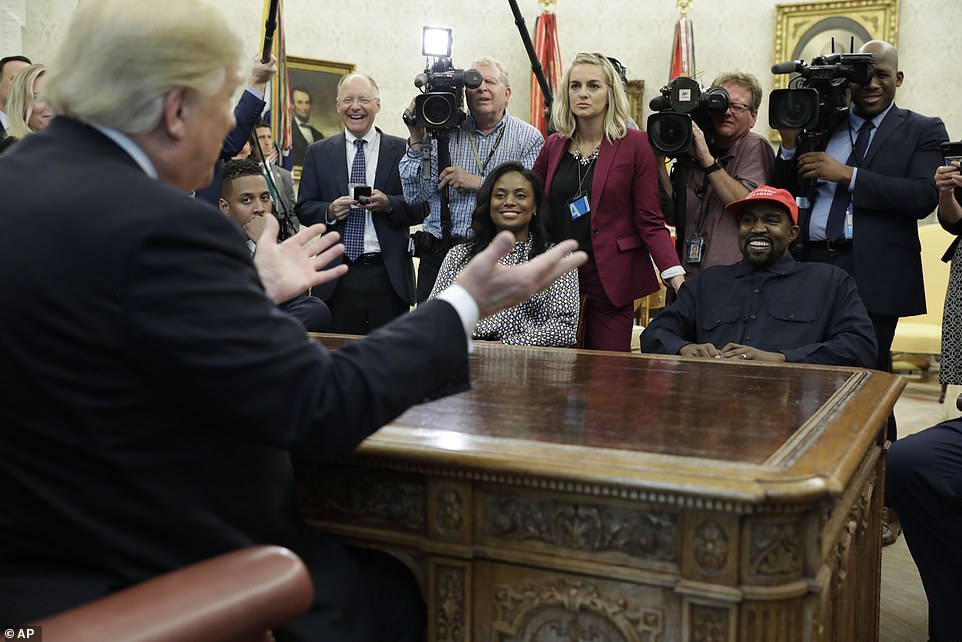 Rapport: Kanye and Trump shared a laugh at one point in the meeting which was attended by reporters 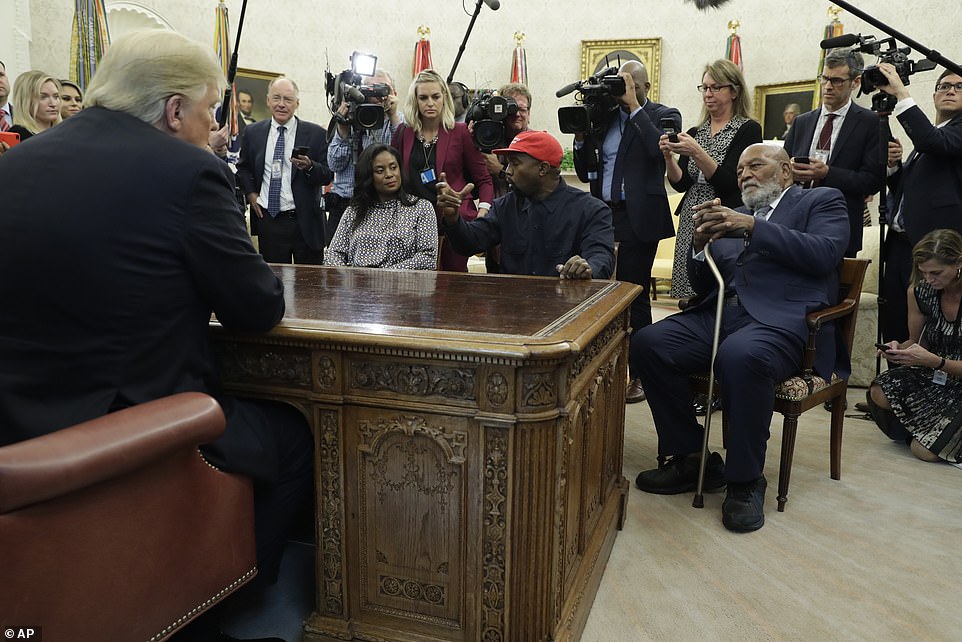 Talking: Kanye West hit his hand on the Resolute Desk to make a point during his talks with Trump

But West wasn’t done. He took questions from reporters for another 10 minutes in which he expounded on Chicago’s murder rate. ‘The problem is illegal guns…Not legal guns. We have the right to bear arms,’ he said.

‘We kill each other more than police officers. And that’s not saying that the police officers are not an issue…because they are in a position of power,’ he asserted.

Addressing the condemnation he’s received for supporting Trump, who his liberal friends say is a ‘racist,’ he said, West, said, ‘You think racism can control me? Oh that don’t stop me That’s an invisible wall.’

To pressing his for a direct answer, West said, ‘I don’t answer questions in simple sound bites.’ He told journalists, ‘You tasting a fine wine. It has multiple notes in it. You better play 4D chess with me….Cause it ain’t that simple.’

Trump said that West ‘gets it’ in remarks after and he hates ‘to see what’s happening’ in West’s hometown.

West told Trump, ‘I love you,’ as he came around to give him a hug. The president informed him that the didn’t want to put him in a bad spot. ‘I’m standing in this spot, I love this guy right here,’ West volunteered.

‘That’s really nice. I did not want to you in that position, but that’s from the heart. Special guy,’ Trump said. ‘Whether you like it, whether you don’t like it, they’re special people,’ he said of Kanye and NFL Hall of Famer Jim Brown, who was also at the White House for the lunch.

West said in the conversation that he wouldn’t challenge Trump in 2020 for president – but he could seek the Oval Office for himself in 2024.

‘Let’s stop worrying about the future all we really  have is today,’ he said. ‘Trump is on his hero’s journey right now. And might not have thought he’d have a crazy mother-f***er like Kanye West’s support.’

The president said earlier in the day that they could be pairing up for more than just a White House visit.

Trump says he ‘could see’ himself campaigning with the rapper.

Trump called West a ‘genius’ in the interview. ‘Those in the music business say he’s a genius, and that’s OK with me, because as far as I’m concerned, he is,’ the president said. ‘He’s not asking anything for himself. He’s not saying, ‘Hey, gee, I want to do this or that.”

‘He’s a private guy and he wants to help people – and maybe more than anything prison reform.’