Nurse Cries in Court After Being Charged With Six Counts of Murder: She Faces 90-year Prison Sentence After 100mph Los Angeles Crash That Killed Pregnant Mother, Her Unborn Baby, Her One-year-old Son and Four Others 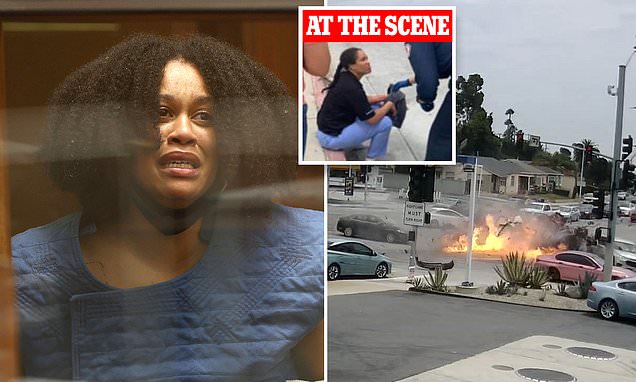 An ICU nurse has been charged with six counts of murder and five counts of vehicular manslaughter after a fiery 100mph crash left a pregnant mother, her unborn child, one-year-old son and four others dead.

Nicole L. Linton, 37, a nurse from Texas who works in Los Angeles, was charged Monday as she cried in court over the Thursday crash that killed six and left eight others injured. If convicted as charged, she could face up to 90 years in prison.

Police said Linton slammed her car into five other vehicles while driving as fast as 100 mph by an intersection at Windsor Hills.

LA County DA George Gascón revealed during a press conference Monday there was no evidence Linton was under the influence of alcohol during the time of the crash.

She was released from the hospital Sunday and is now held at the Century Regional Detention Center in Lynwood, California on a $9 million bond.