North Carolina’s Lt. Governor Says Democrats Want to ‘control’ African-American People and That They Seek to ‘destroy’ Those Who Defy Woke Ideology 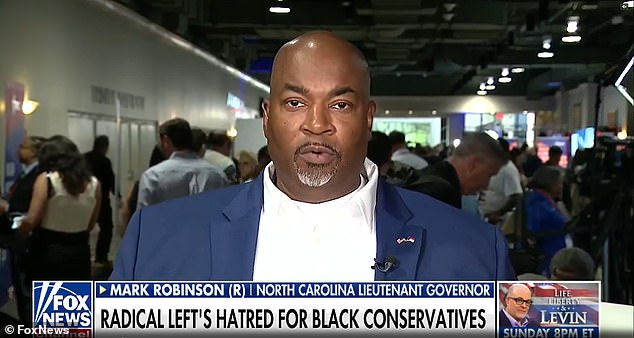 North Carolina’s first black lieutenant governor said Democrats are trying to ‘control’ African-American people and seek to destroy those who do not agree with their woke ideology.

In an interview with FOX News’ Dan Bongino on Saturday, Republican lawmaker Mark Robinson said Democrats’ ‘ideology of control’ towards black people ‘has not changed’ over the course of American history.

‘If you look back through the history of America, Democrats have notoriously despised black people who just don’t go along,’ and ‘push back against stereotypes and all ideologies that are dangerous to them,’ Robinson said.

‘It’s been done to me in several venues since I started this venture,’ he noted, ‘and it’s nothing new.’

Robinson went on to speak about a controversial speech he gave at a Charlotte-area church in May, in which he was accused of misogyny for saying Christians are ‘called to be led by men’ and said he stood up like a man whenever he faced adversity for being a black man.