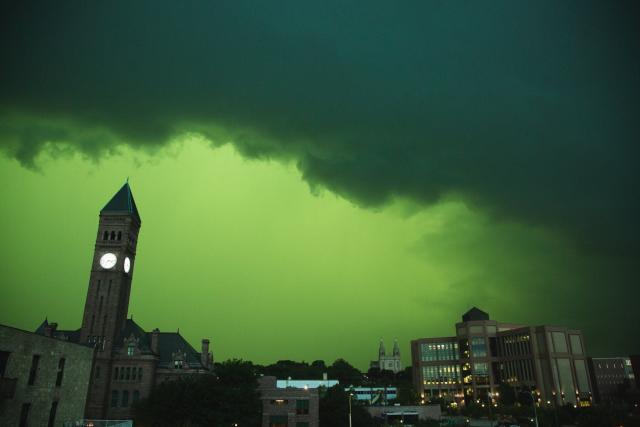 Yes, the sky was green. And not a light green –  the green that’s the color of the sky before aliens arrive in a Jerry Bruckheimer movie. Or before the Wicked Witch of the West threatens Dorothy and her little dog, too.

The National Weather Service confirmed that a derecho barreled through much of South Dakota – as well as Minnesota and Iowa – on Tuesday, leaving thousands without power for hours after the “destructive,” long-lasting wind storm. As of Tuesday night, the extent of the damage from the storm was unclear as the storm and warnings stretched as far as Wisconsin, the weather service said.

In addition to heavy rain, the storm brought black, blue, gray and, again, murky green skies around southeastern South Dakota, including the Sioux Falls area. Weather watchers took to Twitter to share photos of the ominous sky while we tried to find out what the green sky means.

Do green skies mean a tornado is on the way?

Green skies often come with severe weather, but that does not mean a tornado is coming. There isn’t a direct correlation between the two, according to AccuWeather.