City of Orlando Say They “Regret” Fireworks Promotion That Said, “A Lot of People Probably Don’t Want to Celebrate Our Nation Right Now, and We Can’t Blame Them” 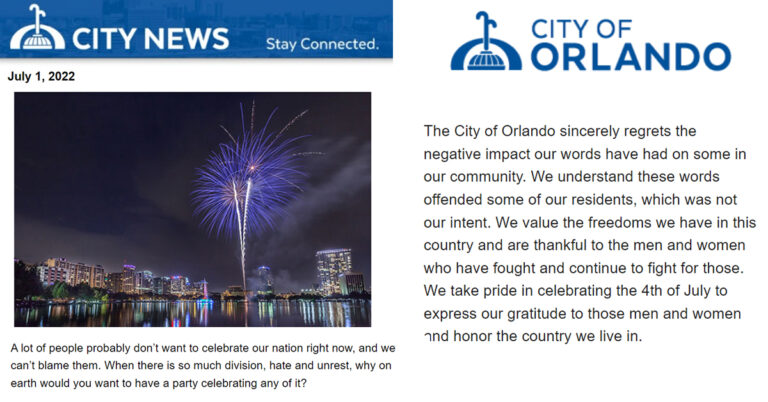 The City of Orlando issued a statement Saturday after sending out a promotion for the city’s fireworks display which claimed that people “probably” don’t want to celebrate because America is full of “hate,” and adding “we can’t blame them.”

The municipality’s City News email on Friday opened with a downer premise, an appeal to come on out to see fireworks for their own sake, despite there being nothing good to like about the United States.

The official email’s entire pitch was focused on the idea of not wanting to celebrate the United States, which is what the backlash was focused on despite the Orlando Sentinel inexplicably downplaying it as merely being about “mentioning division.”

“A lot of people probably don’t want to celebrate our nation right now, and we can’t blame them. When there is so much division, hate and unrest, why on earth would you want to have a party celebrating any of it?” the email began.

The official release continued, saying “in all seriousness” that fireworks are great fun anyway. “Yes, America is in strife right now,” it reads. “But you know what…we already bought the fireworks.”

There was enough of a backlash that they sent out a “regrets” email to the same list on Saturday. Among those objecting publicly were the members of an Orlando police union, who wrote on Facebook that they “do not share the same views as the City of Orlando.”