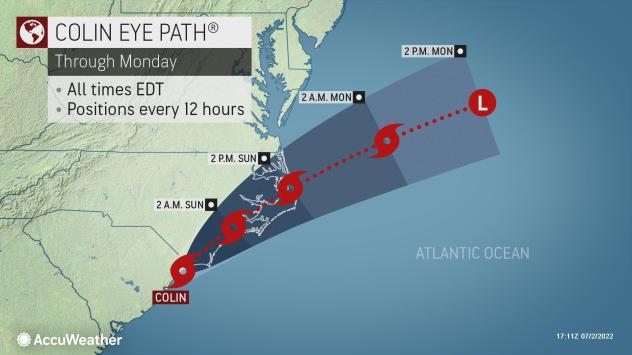 The National Hurricane Center issued tropical storm warnings for parts of the South Carolina and North Carolina coastlines during the early-morning hours on Saturday after a rapidly-developing low-pressure system along the Southeast coast of the United States strengthened into Tropical Storm Colin, the third named storm of the Atlantic hurricane season.

As of approximately 2 p.m. EDT Saturday, Colin was swirling about 10 miles southwest of Myrtle Beach and moving to the northeast with a forward speed of just 7 mph. Colin’s sustained wind speeds were 40 mph, just barely above the 39-mph benchmark to qualify a system as a tropical storm.

As of Saturday afternoon, Colin was described by the NHC as “disorganized” as it continued to produce heavy rains and strong winds along the North Carolina coast. The New River observation station of the National Weather Service reported 0.1 inches of rain due to Colin over the past three hours.

AccuWeather forecasters expect Colin to be a significant rainmaker over the Fourth of July weekend, primarily for the northern coast of South Carolina and just about the entire North Carolina coast as the storm crawls northeastward.