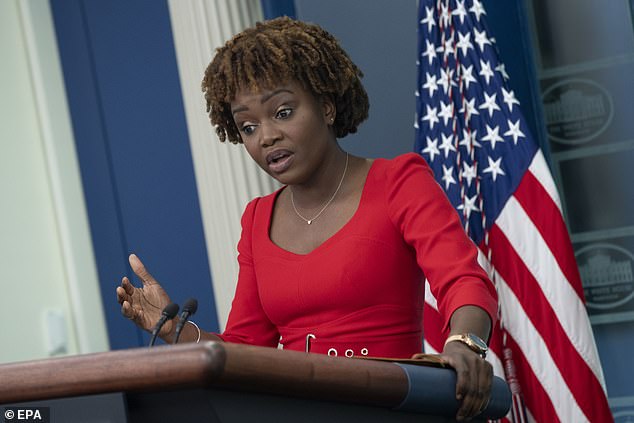 The newsletter anonymously quoted White House reporters, while White House officials defended her sometimes uneven performance, since she took over the podium from Jen Psaki in May.

Among the awkward exchanges highlighted was a back-and-forth with DailyMail.com over whether the president and first lady would be deemed close contacts to Interior Secretary Deb Haaland after she tested positive for COVID-19.

‘Well, I do not know when she last saw the President or the First Lady – Secretary Deb Haaland,’ Jean-Pierre answered during a June 1 briefing, after it was already pointed out to her that they had been together on Memorial Day, two days before. ‘Oh, were they? OK.’

When told that there were pictures of them at the same Memoridal Day event Jean-Pierre responded, ‘OK, great. Well, thank you for that reminder.’

‘I know that – and we’ve said this multiple times: The president has a regular weekly cadence on testing that —-that has been, you know, approved and talked with his doctor,’ she then answered.

While news of Haaland’s positive test broke during the briefing, Jean-Pierre didn’t volunteer that she didn’t know about it until asked.

At least twice Jean-Pierre was unaware of remarks the president made.