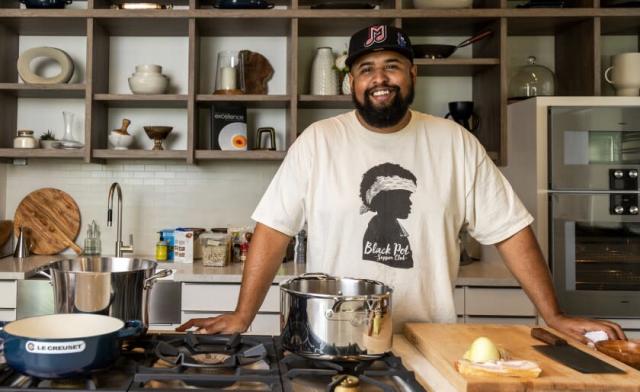 Food for the Fourth of July makes me think of barbecue. And when I think of barbecue, I think of my grandfather, James Howard, a pitmaster who for 30 years owned and ran Dem Bones Bar B-Que Shack on Santa Monica Boulevard in West Los Angeles.

He grew up picking cotton in Texas, learned to cook in the Marines and later opened sober-living homes here in L.A. I have newspaper clippings of him sitting in Dem Bones in front of a big plate of beef ribs, grinning from ear to ear, with blues playing in the background, I’m sure. I spent a lot of time with him as the son of a working single mother, Fredda Draluck, and the influence both my grandparents had on my life is immeasurable.

My grandmother, Marcia Howard, made sure I knew both my Jewish and Black histories, and the work she herself had so proudly done in the civil rights movements. She often reminded me how she had been “arrested” while still in her mother’s womb, when my great-grandmother, who was the one actually arrested, was out protesting in the 1930s in New York, a few months pregnant with Marcia. I watched my grandmother actively work and fight for civil, women’s and farmworkers’ rights almost until the day she passed.

Her Jewish Bronx upbringing was the opposite of my grandfather’s upbringing in rural Texas, but somehow they made magic together and never failed to include me in the show. I spent a lot of time at my grandfather’s restaurant after school but really didn’t know I wanted to cook until after he had been retired for a few years.

When I decided to follow in my grandfather’s footsteps into the culinary world, I started as a pastry cook around 2008, working at Joe’s Restaurant under chef Joe Miller. That’s where I met my good friend and culinary mentor, Brian Dunsmoor. Brian saw something in me from the start and told me back then that I‘d be the pastry chef at one of his restaurants one day.