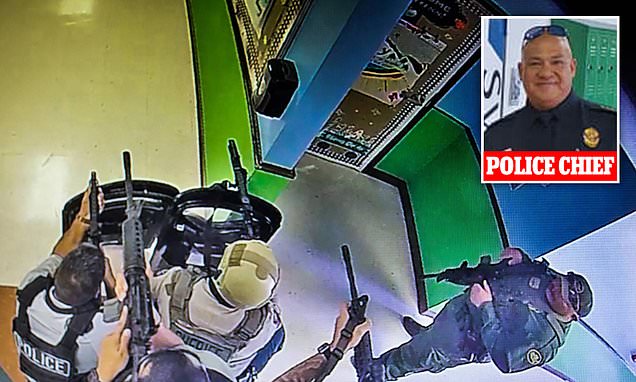 New photos have emerged showing police waiting in a hallway during the Uvalde school massacre, after the town’s mayor defended cops who waited an hour to confront the gunman.

One photo, taken from surveillance video at 12.04pm on May 24, shows police huddled behind ballistic shields just feet away from the classroom where a gunman killed 19 students and two teachers.

It would be another 46 minutes until the heavily-armed police stormed into the classroom, and a total of 77 minutes elapsed between police arriving at the scene and their confrontation with the gunman.

The photos were first published by the Texas Tribune in an article which detailed the agonizing wait and questionable decisions made on the scene by Uvalde School Police Chief Pete Arredondo.

According to the report, surveillance video shows that cops did not attempt to open the doors to classrooms 111 and 112, where the shooter was holed up, during the standoff, contradicting Arredondo’s prior claims.

Some officials believe the doors were not even locked, because the shooter entered without a key, and would not have been able to lock the doors from the inside. Arredondo has said he spent much of the hour-long standoff searching for a master key.