There’s a Devil Loose on Juneteenth: 15-year-old Is Shot Dead and Three Others Injured, Including a Police Officer at Washington DC Juneteenth Music Festival Moechella: Revelers Were Seen Twerking Atop Truck Then Fleeing as Gunfire Rang Out – People, This Is Not What Juneteenth Is for 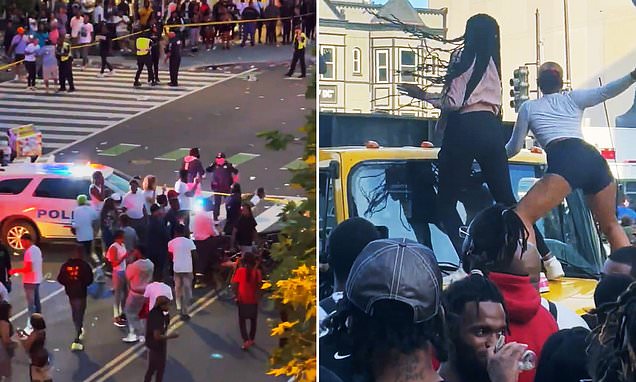 A 15-year-old boy was killed after shots rang out at a social justice-inspired musical festival in Washington DC.

A total of four people, including two adults and a cop, were shot Sunday evening near the intersection of 14th and U Street NW, where the Moechella music festival, a Juneteenth celebration, was underway.

The officer was taken to an area hospital and is in stable condition, police confirmed. The other two victims are also recovering.

Video shared on Twitter showed revelers twerking on top of cars as shots rang out, forcing people to flee for cover.

Other footage shows first responders rendering aid at the scene while a large crowd disperses from the area.

Police are still looking for the gunman.

Stampede at #Moechella … I’m safe but I’m sure many aren’t 🙏🏾. Got into my Emergency Management bag and began calm folks down, that I was hiding behind a tree with.. DONT GO! . @Killmoenews1 @fox5dc pic.twitter.com/MgoJh8tCPZ

Police said the chaos erupted shortly after a fight broke out between Moechella attendees.

After the fight was broken up, a secondary incident occurred, causing festival attendees to scatter. Police say the exact nature of the second incident remains unclear at this time.

Cops shut the festival down after determining it wasn’t safe. Paramedics were rendering aid to those who suffered injuries after being trampled by the fleeing crowd.

During their initial response at the scene, cops recovered a gun from an attendee.

Shortly thereafter, shots were fired near the intersection of 14th and U Street NW, leaving three people injured and one dead.

Several guns were seized near the scene of the shooting, including one from one of the victims.

Officials are working to clear out the area and are continuing to search for the shooter. Police have not recovered the gunman’s weapon yet.