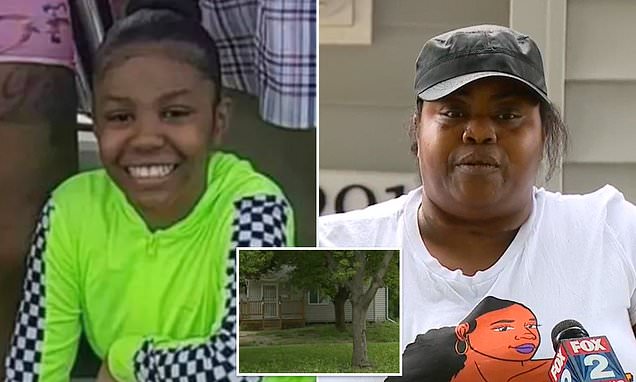 An 11-year-old girl was killed by a stray bullet as she played with family members at her grandmother’s house in Detroit on Saturday.

Police have two people in custody – an adult and a minor – in connection to the incident, but have not commented on their identities to avoid compromising the investigation, they said.

Saniyah Pugh was lying on the ground with four other kids when a bullet ripped through the house from outside and struck her in the back.

She died before emergency services responded.

Members of the community joined the girl’s grandmother, Lawanda Melton, in calling for an end to gun violence in Detroit.

The president of the Community Relations Council of Detroit’s 9th Precinct, Sandra Turner Handy, expressed outrage over the death.

‘It’s time for us to stop crying all the time with the chief about our babies being shot,’ she said, ’11 years old. And she was doing nothing but having fun being a kid.’

‘It’s unbearable. I have a daughter who’s without her child now, who’s empty, looking in her eyes. It just looks like a empty soul. She had nothing left in her. She lost her best friend. She lost her daughter,’ she said.

Detroit Police chief James White said that a number of leads and warrants lead to the arrest of the two suspects, but declined to give details to reporters.

‘We have to be careful we are working an angle on this case that we’re pretty confident that is what happened, but we don’t want to compromise this investigation,’ White said.