Uvalde School Board Will Not Punish ‘Coward’ Police Chief Who Refused to Send Officers in to Battle Gunman as He Shot Children Dead as Official Reveals Robb Elementary Is Closed for Good – Very Simply, This Man Should Be Fired 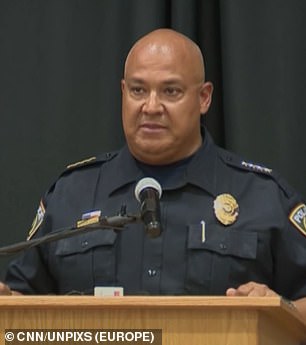 The Uvalde school board did not punish the district police chief who refused to send cops into Robb Elementary School while a gunman was shooting kids dead.

During its first board meeting since the May 24 shooting, the Uvalde Independent School District (UCISD) declined to fire school police chief Pete Arredondo on Friday.

Superintendent Hal Harrell told meeting attendees he was ‘eager’ for the several investigations launched into law enforcement’s response to the shooting to ‘run their course,’ The Texas Tribune reported.

Harrell’s remark implied the school could still take disciplinary action against Arredondo, who has been considered a cowardice ‘man in hiding,’ pending the results of the investigations.

He also told concerned parents that students would ‘never’ return to the Texas elementary school where Salvador Ramos, 18, killed 19 students and two teachers, and left an entire community terrified to go to school.

Arredondo, who did not attend the school board meeting, is facing furious backlash for not sending in a team fast enough to end the gunman’s vile rampage.

Parents who tried to rush into the school to rescue their kids have also expressed outrage over being handcuffed and restrained outside while police let Ramos continue to evoke terror inside the building.