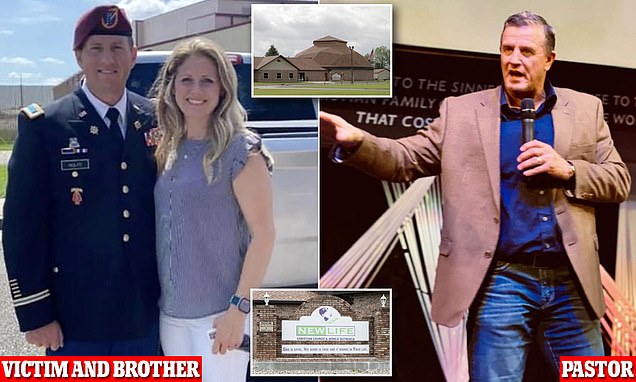 The woman who confronted her former pastor during a service and accused him of sexually abusing her when she was 16 said she felt obligated to maintain a code of silence – until this year when her brother told her he’d seen the cleric in bed with her while she was half-naked as a child.

Bobi Gephart, now 43, said her brother, Edgar Wolfe, 45, had been ‘haunted’ by the memory of seeing ‘his pastor in bed with his younger sister, T-shirt and underwear on.’

After he told his sister, Gephart revealed she had been groomed and sexually abused by Pastor John B. Lowe II of the New Life Christian Church & World Outreach aged 16.

Wolfe immediately confronted Lowe by text, calling on him to resign.

‘I texted Lowe and I said ‘you are done, you will resign, you will make a public confession and you will face criminal charges most likely’.

‘He gave lip service by not following through on Sunday,’ added Wolfe, referring to Lowe’s sermon at the New Life Christian Church & World Outreach in Warsaw, Indiana, on May 22, where he admitted to ‘adultery’ but did not confess it had been with a teen.

‘When he got up there it was half the confession,’ Wolfe added.

After the ‘half confession’ was when Gephart and her husband Nate decided to storm the stage to blow the whistle on the years of sexual abuse she allegedly suffered at the hands of the church’s pastor and founder, Lowe.