AMES, Iowa — The Story County Sheriff’s Office says three people are dead in a shooting outside of Cornerstone Church on the eastern edge of Ames on Thursday night.

Sheriff Paul Fitzgerald identified the two women killed in the shooting as 22-year-old Eden Moriah Montang, of Boone, and 21-year-old Vivian Renee Flores, of West Des Moines. Fitzgerald identified the shooter as 33-year-old Johnathan Lee Whitlatch. Fitzgerald said Whitlatch fired several rounds from a 9mm handgun, striking Montang and Flores, then turned the gun on himself. A third woman who was with Montang and Flores was able to find safety and was not injured.

The shooting happened during Salt Company, a college ministry program at the church. It was the first summer night of the program at Cornerstone. Officials said they received multiple 911 calls at 6:51 p.m. on Thursday. Within minutes of the shooting, deputies arrived to find all three down with gunshot wounds. Emergency responders provided aid at the scene, but those attempts were unsuccessful.

“This was a situation that could have unfolded much more tragically had this just been a random act of violence. There was over 80 students in the auditorium at bible study, and if he had found his way inside the church with that intent it would’ve been much more tragic than what we what we have today. This is something where the female and he had just broken up from a relationship and because of that breakup is what caused the charges to be filed by the Ames Police Department,” Fitzgerald added.

Fitzgerald said both Montang and Flores were students at Iowa State University. A school directory lists Montang as a senior in Human Development and Family studies. Flores was a junior in Animal Science.

Fitzgerald said the shooting was a domestic incident as Whitlatch and Montang were previously in a relationship. He said Montang had recently broken up with Whitlatch. On May 31, Whitlatch was charged with harassment and posing as a public official by Ames police in a domestic incident. Court documents show Whitlatch called an Ames spa where Eden Montang worked several different times on Wednsday. At times, he claimed to be a police officer, other times using a different fake name. He was scheduled to appear in court on those charges on June 10. Fitzgerald said Montang had a restraining order in place against Whitlatch.

Fitzgerald said the investigation into the shooting continues as a search warrant was executed at Whitlatch’s home in Boone. They took several items into evidence, including computer equipment, electronic files, ammunition, Whitlatch’s pickup, more 9 mm ammunition, and a receipt from a business in West Des Moines, where he purchased ammunition an hour before the shooting.

“We all know this is a very tragic event for our community, but I think also nationwide as we experience the violent incidents nationwide it only seems to increase. The only thing I would like to maybe reiterate and put out there again is expressing our condolences, and our hearts go out to all those affected by this incident. We ask for your thoughts and prayers to be extended out to them, and to provide them with some privacy as they process this,” said Capt. Nicholas Lennie. 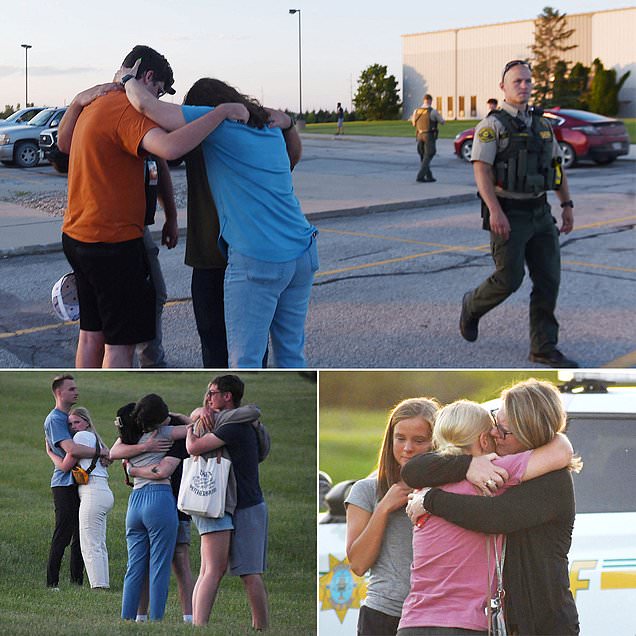 A gunman in Iowa shot dead his ex-girlfriend and her friend during a domestic attack before turning the gun on himself, police have revealed.

He blasted them with a 9MM pistol following a fallout with Montang, the local sheriff said at a Friday press conference.

The attack was the latest deadly shooting to rock the US, following killings in New York, Texas, California and Oklahoma in recent weeks.

Whitlatch and Montang had recently broken up and he had been harassing here, cops said. He had been charged Tuesday with harassment and impersonation of a public official. Both of these charges were related to Montang as well as a restraining order, police said.

The suspect had also been awaiting trial on a charge of sexual abuse stemming from an incident last October when he twice put his hand down a woman’s pants and attempted to penetrate her at a nightclub in Cedar Falls, according to the Waterloo-Cedar Falls Courier. The alleged victim was not Montang nor Flores.

The incident was caught on surveillance cameras. Whitlatch told authorities he didn’t remember much about the incident because he’d been drinking. Deposition interviews in the case were scheduled to start later this month.

Nicholas Lennie, chief deputy of the Story County Sheriff’s Office, said that they were aware of the charge. Fitzgerald added that he had posted bond in the domestic case and was due to appear in court on June 10.

Authorities conducted a search of Whitlatch’s residence after the shooting and discover ammo for the 9MM pistol that had been purchased just an hour prior to the shooting, as well as an AR-15 unrelated to the attack.

Montang and Flores were attending a bible study at Cornerstone Church in Ames, where both went to Iowa State University.

The church held a service to pray for the victims on Friday morning, with several members embracing each other while unable to hold back tears.

It was a program both were encouraged to attend that co-mingled students with high schoolers. There were 80 people in attendance which led Fitzgerald to suggest that the shooting could have been much worse.

‘He was there for a specific purpose, which he accomplished,’ the sheriff said.