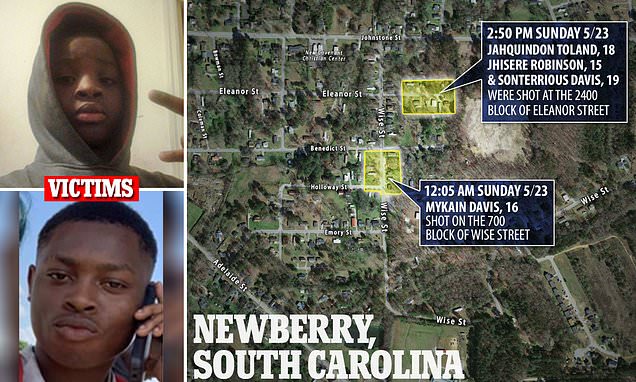 The rural town of Newberry, South Carolina was rocked over the weekend by two separate fatal shooting incidents that took the lives of four teenagers just hours apart and about a block away from each other.

On Sunday morning, cops responded to the scene of a shooting on the 700 block of Wise Street and found 16-year-old Mykain Davis shot at about 12:05 a.m., Newberry Police Chief Goodman said.

Davis was taken to Newberry County Memorial Hospital where he died.

About 15 hours later, at 2:50 p.m. Sunday afternoon, there was a second burst of gunfire, neighbors told police.

Authorities say that shooting claimed the lives of Jhisere Robinson, 15, Jahquindon Toland, 18, and Sonterrious Davis, 19, at the 2400 block of Eleanor Street.

Guns were found at the scenes of both shootings and the victims all attended Newberry High School at one point.

In an interview with the DailyMail.com, Police Chief Kevin Goodman would not say if the crimes were gang related or if revenge was a motivation for the murders.

One of the victims in the second shooting was questioned in the first shooting, but the chief would not say which one.