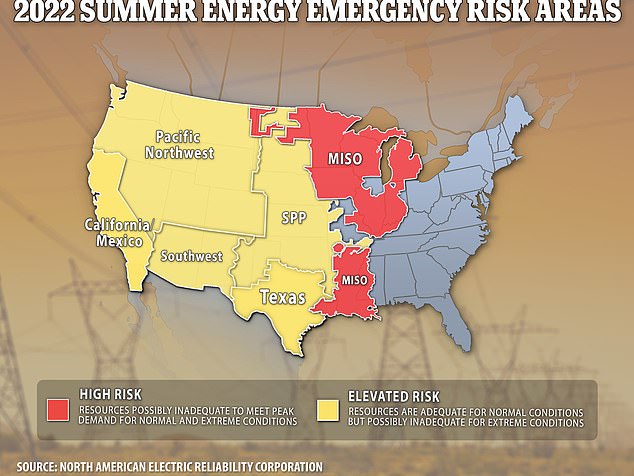 States stretching from the Great Lakes to the Pacific Ocean which are home to tens of millions of Americans could have a hard time producing enough power for their residents this summer.

The ‘MISO’ part of America’s power grid – whose full name is the Midcontinent Independent System Operator is at greatest risk of a large-scale outage.

That warning was given by the North American Electric Reliability Corporation (NERC), which released a map showing Michigan, most of Indiana, most of Illinois, and Wisconsin were in trouble.

Also at the highest risk are Louisiana, Mississippi, Arkansas and a small part of East Texas. That high-risk classification means that the existing power grid is ‘potentially insufficient to meet peak load during both normal and extreme conditions,’ according to NERC.

Every state that sits further west of that area is at an elevated risk, according to NERC. That means power plants should have sufficient resources ‘to meet peak load during normal conditions, but potentially insufficient during extreme conditions.’