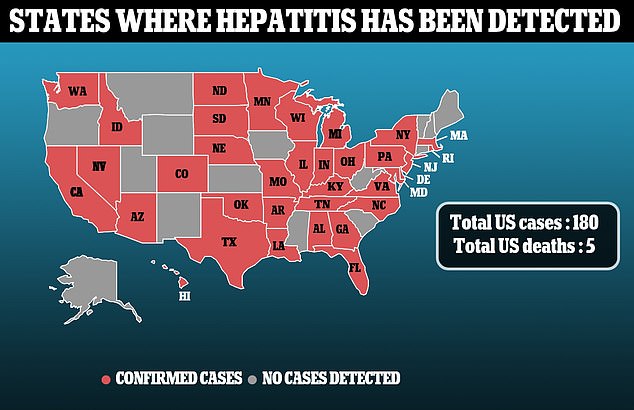 Another child has died in the mysterious hepatitis outbreak, health officials revealed Friday bringing the national tally to six.

The deputy director for infectious diseases at the Centers for Disease Control and Prevention (CDC) revealed the fatality in a press conference Friday, saying it was reported a day after the agency updated its case count.

Dr Jay Butler did not reveal where the fatality occurred, or the age of the child that died from hepatitis.

America has reported the most deaths out of any nation so far, with Indonesia having reported five and one each in Palestine and Ireland.

A total of 180 hepatitis cases have also been detected across 35 states, with the illness more likely to be detected in more populous areas. There have also been 15 liver transplants.

Globally more than 500 cases have now been spotted in the outbreak mostly in the UK and U.S., likely because both countries have better surveillance systems.

Scientists are puzzled as to the cause behind the spate of cases, but an infection with adenovirus — which can cause the common cold — is the leading theory.

Others include a previous Covid infection or weakened immunity due to lockdowns leaving children at risk of the disease.