His name did not appear on his art. Most of the millions who have seen it do not know who he is.

But Fred Carter’s art is unforgettable.

He drew bodies that were heavy—weighted with humanity and the possibility of redemption. He painted biblical characters who seemed real enough that their struggles and stories could be the viewers’ own. He depicted sin so that it was tempting; salvation so it mattered.

And his art was reproduced by the millions. It was distributed across the country and around the world while he remained in anonymity. 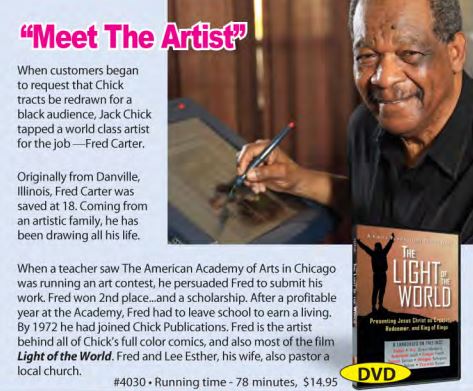 Carter—an African American artist who drew gospel tracts, evangelical comic books, and Black Sunday school curricula—died on May 9 at the age of 83.

He was the close collaborator of Jack Chick, pioneer of the popular evangelistic cartoons known as Chick Tracts. According to Christian Comics International, more than half of Chick Tracts were drawn by Carter.

Carter worked with Chick for eight years before Chick acknowledged the partnership, despite the obvious, dramatic difference between the men’s two art styles. Some suspected Chick was trying to hide Carter’s contributions, perhaps out of a desire to claim all the credit or out of fear the presence of a Black man would spark controversy.

Chick, for his part, said the decision was Carter’s.

“Fred is rather shy and declines to put his name on the art,” he said.

Carter appears to have only given one interview in his 49-year career, speaking briefly to a Los Angeles Times reporter in Rancho Cucamonga, California, in 2003. His statements were simple and straightforward.

About his calling: “It’s almost not like a job. It’s like a ministry I always wanted to be in.”