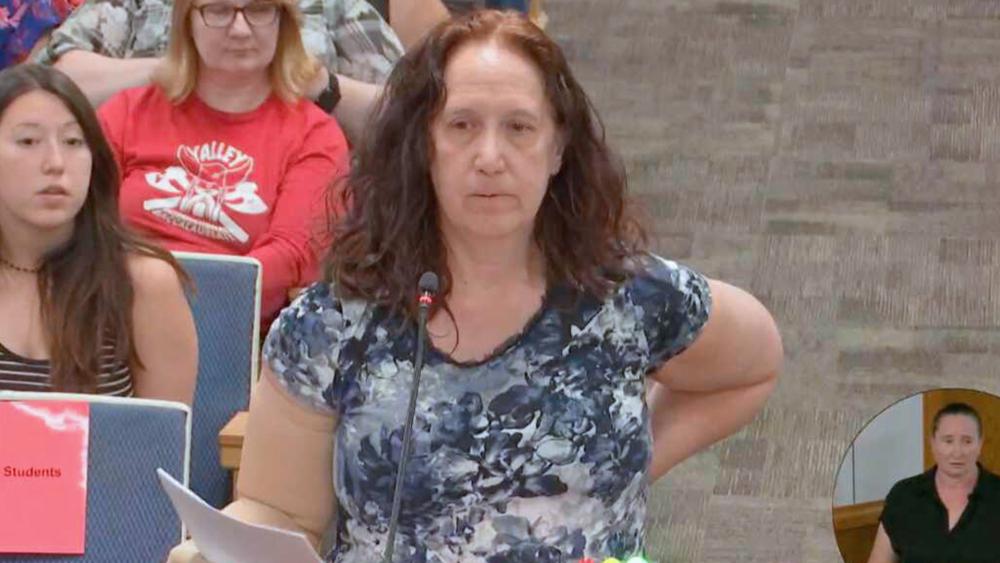 A Las Vegas mother who appeared at a recent Clark County School District (CCSD) board meeting to share “pornographic material” her teen daughter was allegedly forced to memorize had her microphone cut off before posing a powerful question to school officials.

“I am going to give you an assignment given to my 15-year-old daughter at a local high school,” mom Kandra Evans said during a May 12 meeting. “This will be horrifying for me to read to you, but that will give your perspective on how she must have felt when her teacher required her to memorize this and to act it out in front of her entire class.”

But just moments after Evans, who appeared rattled and emotional as she stood before the board, started to read the passage, her microphone was cut off and an official said, “We’re not using profanity.”

A mom in @ClarkCountySch reads from a graphic assignment her daughter was required to do. Her mic then gets cut off because it’s inappropriate for a public discussion.

Adults can’t handle hearing this content yet they readily give it to kids in school. How does it make sense? pic.twitter.com/GFP1bGhNlg

The contents of the purported excerpt — allegedly shared with students in a classroom — were apparently too graphic to be proclaimed at the adult-led meeting.

A district official added, “This is a public meeting. I ask for decorum.”

“If you don’t want me to read it to you, what was it like for my 15-year-old daughter to have to memorize pornographic material?” Evans asked.

CCSD Superintendent Dr. Jesus Jara then stepped in to say the “staff is on this,” KVVU-TV reported.

Evans was permitted to continue, though, and proceeded to break down some of the laws she believes were violated by the controversial assignment.