There’s a Devil Loose: Asian American Man Who Shot One Dead and Injured Five at Orange County Church Was ‘Motivated by Political Tensions Between China and Taiwan’ and Superglued Locks Shut 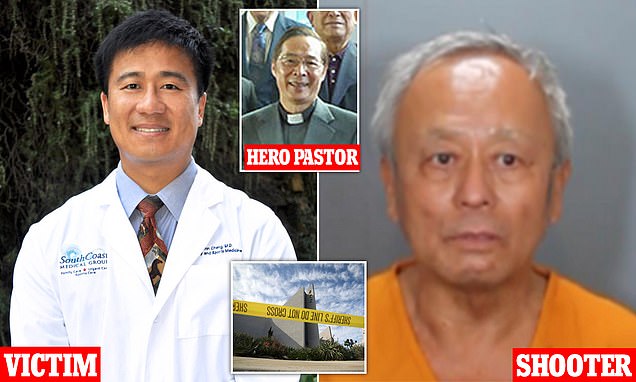 Police say the Chinese man accused of shooting dead a Taiwanese person and injuring five others at their California church on Sunday was motivated by ‘political tensions between China and Taiwan.’

David Chou, 68, is accused of opening fire at a Taiwanese congregation that was meeting at a church in Laguna Woods, about 50 miles southeast of Los Angeles.

He killed John Cheng, a 52-year-old physician. He leaves behind a wife and two children.

The injured five included four men, aged between 66 and 92, and an 86-year-old woman.

Four of the victims remain in critical condition.

Chou, who is from Las Vegas, has been charged with one count of murder and five counts of attempted murder and is being held on $1 million bail.

At a press conference Monday afternoon, deputies revealed that the gunman was motivated by his victims’ ethnicity.

Taiwan is a sovereign island-nation about 100 miles off the coast of China. The small country is still claimed by China, though it has its own representation at the United Nations and is recognized as independent by 13 countries and the Vatican.

Chou even tried to superglue the locks in an attempt to keep everyone inside during the rampage, deputies say.

A pastor hit Chou over the head with a chair shortly after he began his shooting spree. Elderly congregants, who say they’ve never seen him before, then took away his weapons and hogtied him with an electrical cord until police showed up.