There’s a Devil Loose: Grandmother is Killed in London Bloodbath: NHS Worker Is Found Stabbed to Death Alongside Two Women and a Man at £600,000 Home – as Police Question Suspect in His 20s on Suspicion of Murder 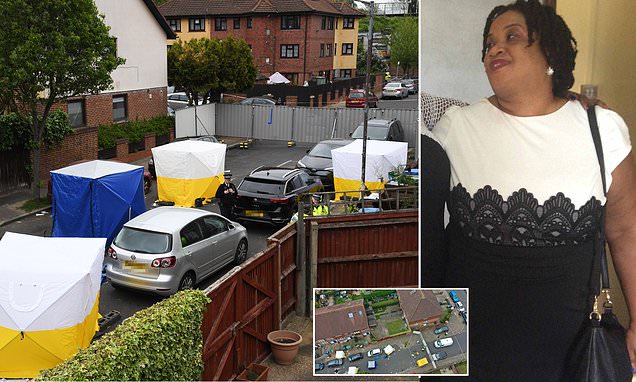 One of the three women stabbed to death along with a man in South East London today worked at a local NHS hospital and was undergoing treatment for cancer, MailOnline can reveal.

A relative of grandmother Dolet Hill, 64, has confirmed she was one of four people found dead at a terraced house in Bermondsey in the early hours of this morning, alongside a woman in her 40s and another in her 30s.

Her niece said Ms Hill had two daughters and two grandchildren, while locals said she worked as a housekeeper at the nearby Guy’s Hospital in Southwark.

One neighbour said: ‘She was a lovely lady, she worked at Guy’s Hospital as a housekeeper. She was also having treatment for cancer. I can’t believe this has happened.

‘I live close to her and didn’t hear a thing until I saw all the police this morning outside her house. I know she has two daughters. My heart goes out to her family. It’s such an awful, awful thing to happen.’

Another added: ‘My friend knew Dolet as she used to work with her at Guy’s Hospital. She was originally from Jamaica but had been living there a while.

‘I couldn’t see what happened but from my house I could see that the police and paramedics had taken at least two of the victims into the street and were working on them for some time.’

Ms Hill’s niece Venecia Reid paid tribute and said she ‘didn’t deserve this’, telling reporters near the scene: ‘She was very loving, very kind, very generous. She worked very hard in this country to support her two girls and her two grandkids. She does not deserve this.’

Metropolitan Police Chief Superintendent Colin Wingrove said today that the other three victims were believed to include a man in his mid-60s, along with one woman in her 40s and another in her 30s.

Other neighbours revealed how they heard chilling screams before armed police swooped on the home and made the grim discovery. Detectives were called at about 1.40am to reports of a disturbance at the property, before forcing entry inside and discovering four people with stab injuries.

A man in his late 20s was arrested on suspicion of murder and taken to a police station where he remains in custody. Specialist crime police are investigating, and said they believe all five people were known to each other.

One resident heard a woman ‘screaming for about five minutes’, adding: ‘It was awful. I thought it was someone was holding someone hostage or something but when I heard the police, the helicopter, the ambulances, I knew it was really serious. I saw about eight or nine police cars – all were armed – come out and surround the area.’

Police put up a large cordon including metal grates around Delaford Road while their investigation continued on the street. Four forensic tents were put up outside the £600,000 house in the London Borough of Southwark.

Another neighbour said: ‘I saw a load of police jump out of their cars with guns. There were about eight police cars, several ambulances, and some of them were going door to door.

‘They came to the back garden to make sure our door was secure. It was about 2am. We didn’t hear anything else – we were just told to stay inside. My husband said he swore he heard screaming, shouts, some commotion.’

It comes as London Mayor Sadiq Khan continues to face questions over crime rates in the capital, with boxer Amir Khan saying last week that he should ‘pull his finger out’ after he was mugged of his £72,000 watch in Leyton.