Is Another Plague Upon Us? One Hepatitis-stricken Child Has Died and 17 Have Needed Liver Transplants Because of Mysterious Spate of Acute Cases First Spotted in the UK, WHO Says 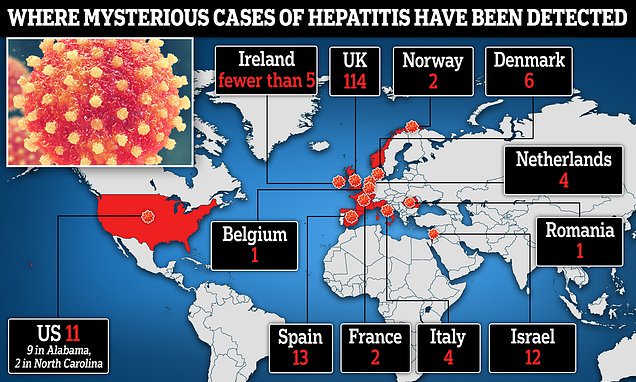 qTwo more British children have needed a liver transplant after being sickened with a mysterious form of hepatitis, health chiefs revealed today.

Ten youngsters have now undergone the critical procedure, with 114 now known to have been struck down by the peculiar illness.

UK Health Security Agency bosses today called on parents to ‘be alert’ to the signs of the liver disease, which has been spotted in 12 different countries, including the US, Ireland and Spain. One child has died so far.

Dr Meera Chand, director of clinical and emerging infections at the UK agency, urged parents to contact the NHS if they are concerned.

The majority of cases have been spotted in under-5s who were initially hit with diarrhoea and nausea before later getting jaundice — the yellowing of the skin/eyes. Other symptoms can include dark urine, grey-coloured faeces, itchy skin, muscle pain, a fever, lethargy, loss of appetite and stomach pains.

Investigations are ongoing but officials believe the illness may be triggered by an adenovirus, which is usually to blame for the sniffles.

Experts say lockdowns may have weakened the immunity of children and left them more susceptible to the virus, or the offending pathogen may have mutated to pose a greater threat. Other theories include a new Covid strain or co-infection with adenovirus and Covid.

UK officials have ruled out the Covid vaccine as a possible cause, with none of the ill British children vaccinated because of their young age. None of the 11 cases in the US were jabbed either.