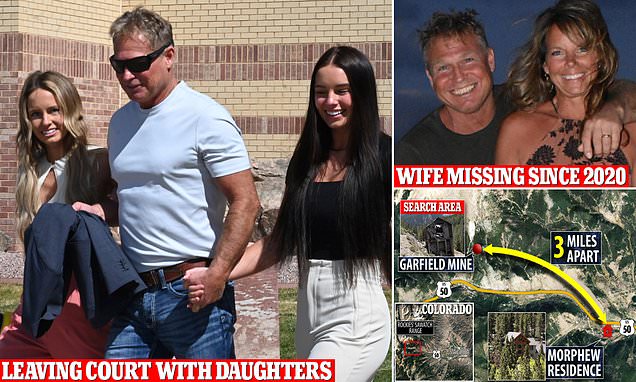 Barry Morphew’s daughters have spoken out to support him after Colorado prosecutors dropped murder charges against him in relation to his wife Suzanne’s disappearance.

In a motion on Tuesday, just a week before Barry’s trial was due to start in Cañon City, prosecutors admitted that they did not have enough evidence to secure a conviction – but left the door open to filing new charges and said they were hopeful of finding Suzanne’s body.

Barry’s two adult daughters with Suzanne, Mallory and Macy, stood by his side at the hearing, hugging him and crying in relief as the judge approved the dismissal.

‘We miss our mom dearly and we know our dad didn’t have anything to do with it,’ Mallory told the judge after he granted the dismissal, according to the Denver Gazette.

‘We’re thankful we can go on with our life and just take time to heal,’ said a tearful Macy. ‘We wish we’d been treated better.’

Tensions ran so high at the hearing that a service dog in the back of the courtroom was heard whining during the proceedings, as if to comfort those present.

Barry pleaded for help finding Suzanne after she disappeared and was reported missing on Mother’s Day in 2020, but he was arrested and charged with murder and other crimes last year. He had pleaded not guilty and has always denied having any role in her disappearance.