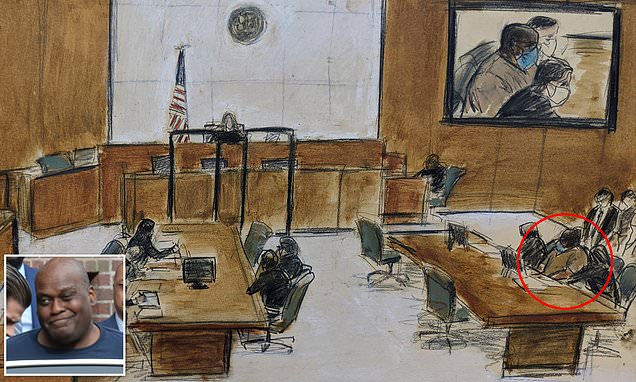 Brooklyn subway shooting suspect Frank James was held without bond as he made his first court appearance on Thursday charged with staging a terrorist attack on mass transit.

James, 62, was arraigned in the federal court in the Eastern District of New York in Brooklyn on Thursday afternoon, some 24 hours after being dramatically arrested on the sidewalk in the East Village.

On Thursday, he was represented in court by public defenders and said nothing as the judge addressed him other than answering ‘yes’. Asked if he’d seen the complaint against him, he said: ‘Yes I have.’

Public defenders asked for a psychiatric evaluation to be carried out in custody. They also asked for magnesium tablets for James, who suffers ‘leg cramps’.

He said he understood the charges against him. James waived his right to a preliminary hearing. He was held without bond.

Prosecutor Sara Winik told the court: ‘The defendant terrifyingly opened fire on passengers on a crowded subway train, interrupting their commute in a way that has not been seen for 20 years.

‘This was premeditated, carefully planned and it caused terror among our entire city.’