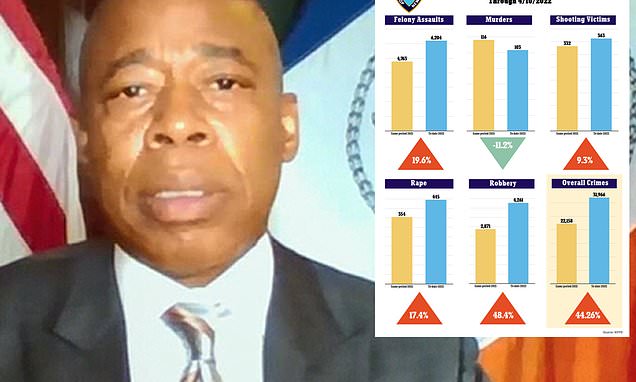 Mayor Eric Adams has blasted Black Lives Matter activists for failing to act after a series of shootings ripped across New York City in yet another night of bloodshed.

He slammed the group and asked why they were not out condemning the latest violence to erupt in the Bronx and Brooklyn.

The city’s second black mayor pointed out to movement leaders that those who were killed or wounded were all black, adding: ‘We can’t be hypocrites.’

Bullets hit at least 15 people and two people were killed as gun violence continued to spiral out of control Tuesday night.

A 23-year-old woman was hit by a stray round as she sat in her car while a 22-year-old man was also killed in a separate attack.

The shootings came less than a day after Frank James allegedly sprayed bullets into a subway in Brooklyn, hitting 10 people.

Adams told NY1 with Ruschell Boone on Wednesday: ‘Where are all those who stated ”Black Lives Matter”?

‘Do an analysis of who was killed or shot last night. I was up all night speaking to my commanders in the Bronx, in Brooklyn. The victims were black.’