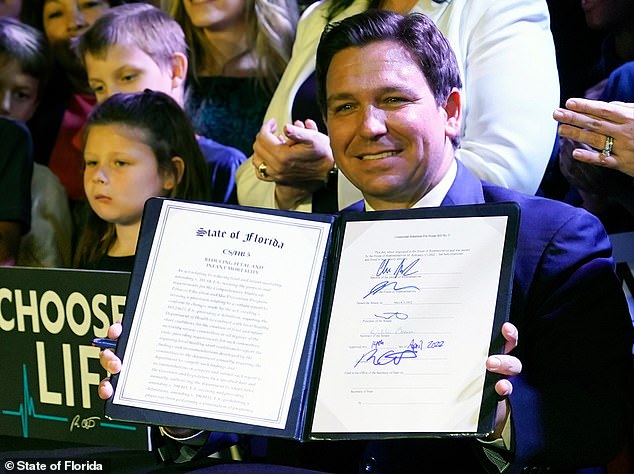 Florida became the latest Republican-led state to clamp down on abortion rights after Governor Ron DeSantis signed a law Thursday that bans the procedure after 15 weeks.

Red states have launched a new wave of pro-life restrictions over the last year, as the Supreme Court weighs a historic challenge that could see federal protections on abortion rolled back completely.

The Sunshine State’s new law, which takes effect July 1, contains exceptions if the abortion is necessary to save a mother’s life, prevent serious injury or if the fetus has a fatal abnormality.

It does not make exceptions for rape, incest and human trafficking.

Florida’s current laws allow abortion up to 24 weeks into the mother’s term.

DeSantis, who has been floated as a near-certain favorite for the White House in 2024 if Donald Trump does not run, boasted on Thursday that he was defending ‘those who can’t defend themselves.’

‘This will represent the most significant protections for life that have been enacted in this state in a generation,’ DeSantis said as he signed the bill at the ‘Nación de Fe’ (‘Nation of Faith’), an evangelical church in the city of Kissimmee that serves members of the Latino population.

‘We are here today to protect life. We are here to defend those who can’t defend themselves,’ DeSantis added. ‘It’s a statement of our values that every life is important.’