Tony Dungy Responds to Critics Outraged Over Fatherhood Event With Florida Gov. DeSantis: I Am Not Playing Politics, “I Am Serving the Lord” 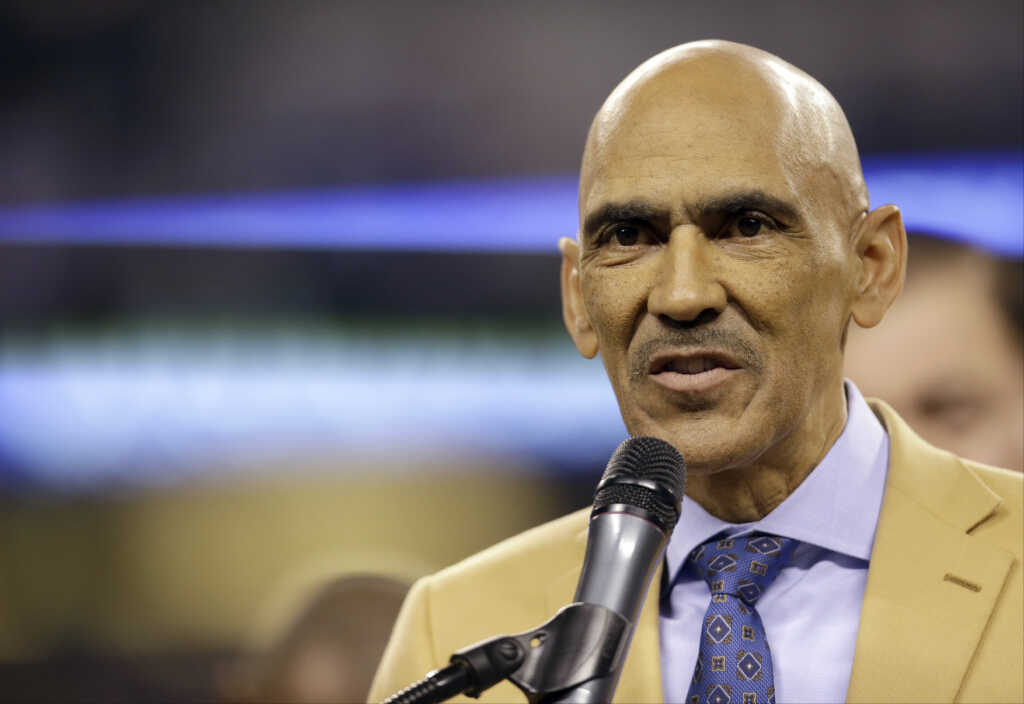 Famed football coach Tony Dungy is hitting back after critics lambasted his appearance Monday alongside Florida Gov. Ron DeSantis (R) at a signing event for HB 7065, a bill aimed at bolstering fatherhood.

Dungy, who helped found All Pro Dad, an organization that supports fatherhood, said, despite the harsh critique, he will continue to support fathers and families and will continue “serving the Lord.”

We’ll get into his full remarks on the matter, but let’s first explore the background.

The bill at the center of the Dungy angst — signed Monday by DeSantis — empowers Florida’s Department of Children and Families to provide grants to non-profits that focus on helping equip fathers to be more engaged with their children. The massive effort will purportedly dole out $70 million to these charities.

Recipients will include mentorship opportunities for at-risk kids and groups aimed at helping dads make good on child support responsibilities, among other efforts.

“Any dad who may not be engaged, we want to be able to support,” DeSantis said during the signing event Dungy attended. “We’ve got programs, we’ve got community groups, we’ve got non-profits … You’re not a man by leaving your kids hung out to dry. You need to be there.”

The effort might, at first sight, seem relatively uncontroversial, but it didn’t take long for some to make it political and try to bully Dungy with online criticism.

Why Was Dungy Under Fire?

It appears Dungy received critique based on two key factors: comments he made in 2014 about an unrelated issue — and general disagreement with his fatherhood comments made during the signing ceremony.

Let’s lead with the latter issue: Dungy praised the bill during the event and shared his personal story of having a loving dad growing up. After he started coaching, though, he said he learned of the full impact of fatherlessness.

“Not everyone had the same blessing that I did,” he said.

Dungy described a conversation he once had with Abe Brown, who ran a prison ministry. Brown took Dungy with him to jail one day and later told Dungy how the perils of fatherlessness had impacted the lives of many young prisoners they encountered.

“I asked [Brown], how do those young boys get here? And he told me, it’s not socio-economic, it’s not racial, it’s not education, it’s none of that,” Dungy recalled. “Ninety-five percent of these boys did not grow up with their dad. And that hit me. That hit me very hard.”

Some critics pushed back against these comments, calling Dungy a “bigot”; others said his statements are simply based on a myth.

We’ll come back to this facet of the controversy a bit later.

Tony Dungy lives in fantasy land with the rest of the Trump/DeSantis fanboys. This myth has been statistically debunked year after year, and even the most absurd claims aren’t anywhere near “95%”. https://t.co/vj8jQhSZwFhttps://t.co/2iAnBrz5sA https://t.co/ecrK2dgzG2

Tony Dungy probably means well and does plenty of good in the world.

However his racist apologist, respectability politics, and The Black friend showmanship is an unnecessary dance move he doesn’t need to “tap” into to do that work

But this, as noted, was just one of the reasons Dungy has been under fire.

The other cause for angst appeared to be a reaction to his 2014 comments about Michael Sam, an openly-gay former football player.

At the time, Dungy said he would have passed on drafting Sam, though he reportedly didn’t go into specifics.

“Not because I don’t believe Michael Sam should have a chance to play, but I wouldn’t want to deal with all of it,” Dungy said of his reasoning. “It’s not going to be totally smooth … things will happen.’’

The comments drew the ire of some critics — and resurfaced this week after Dungy appeared at the DeSantis event. It’s unclear why this connection was so cemented in peoples’ minds.

However, DeSantis is also locked in a brutal battle with Disney and other critics over his signage of the Parental Rights in Education Act (a law being mischaracterized in media as the “Don’t Say Gay Bill”). It’s possible the DeSantis connection sparked critics’ comments on the Sam matter, which at least one tweet seemed to indicate.

“Tony Dungy revealed his true self a few years ago when he said he wouldn’t want an openly gay player on his team,” Palmer Report tweeted. “So of course he’s appearing alongside anti-LGBT extremist Ron DeSantis. When people tell you who they are, believe them the first time.”

Other critics piled on.

Tony Dungy revealed his true self a few years ago when he said he wouldn't want an openly gay player on his team. So of course he's appearing alongside anti-LGBT extremist Ron DeSantis. When people tell you who they are, believe them the first time.

So, How Did Dungy Respond?

Dungy responded to the controversy by noting something quite intriguing: while some dismissed his comments on fatherhood, he dropped a tweet reminding everyone that former President Barack Obama once made similar proclamations.

“2 days ago I spoke on behalf of a Florida bill that supports dads & families and it offended some people,” Dungy tweeted. “14 yrs ago Pres Obama said the same things almost verbatim.”

He continued, “I’m assuming people were outraged at him too. I am serving the Lord so I’ll keep supporting dads and families.”

2 days ago I spoke on behalf of a Florida bill that supports dads & families and it offended some people. 14 yrs ago Pres Obama said the same things almost verbatim. I’m assuming people were outraged at him too. I am serving the Lord so I’ll keep supporting dads and families.🙏🏽🙏🏽 pic.twitter.com/7eIemEGe9T

Dungy referenced a speech Obama gave to mark Father’s Day in 2008. The then-presidential candidate delivered his remarks at the Apostolic Church of God in Chicago, Illinois. Here’s just a portion of what Obama said:

“But if we are honest with ourselves, we’ll admit that what too many fathers also are is missing — missing from too many lives and too many homes. They have abandoned their responsibilities, acting like boys instead of men. And the foundations of our families are weaker because of it.

Politifact later fact-checked — and rated “true” — one of the above claims. After Obama said, “More than half of all black children live in single-parent households, a number that has doubled — doubled — since we were children,” Politifact said, “Statistics don’t lie in this case.”

Regardless of the controversy over Dungy’s comments, his resolute and unwavering conclusion that he is “serving the Lord” and has no plans to stop serving “dads and families” is sure to resonate with Christians.