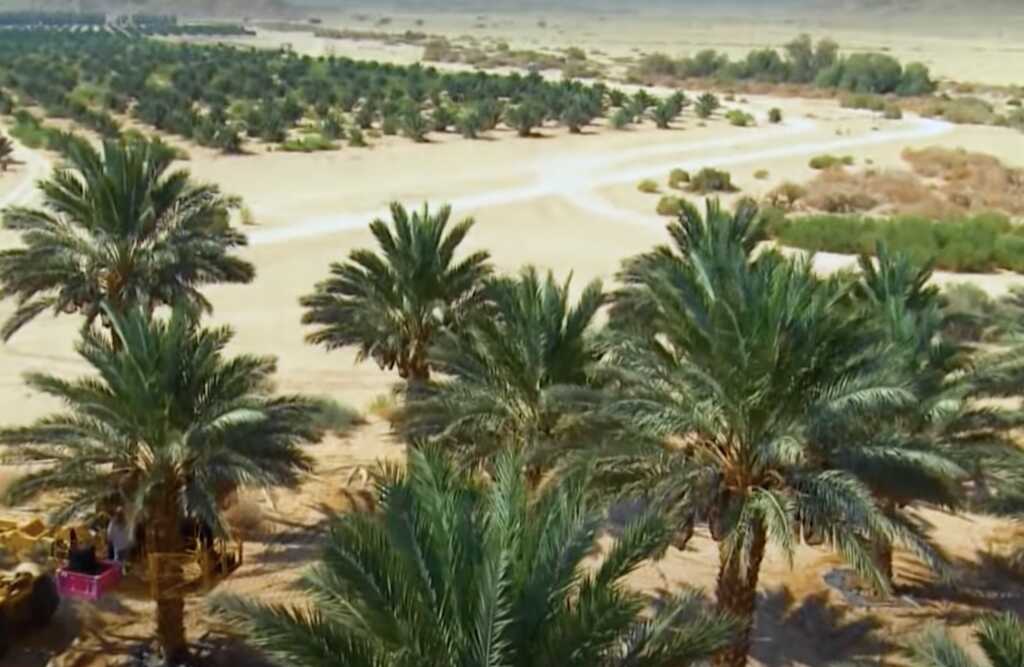 In the middle of Israel’s Arava Desert, a farming community is bringing trees back to life that are bearing fruit from the time of the Bible.

A little, young-looking palm tree named Judith was planted on Kibbutz Ketura recently. And though she’s just nine-years-old, she carries an ancient heritage.

“We’re talking about the resurrection of 2000-year-old plus ancient date seeds that come from the Judean Desert and from Masada and which are part of a scientific experiment,” said Sarah Sallon, Director and Founder of The Natural Medicine Research Center at Hadassah Medical Organization, Jerusalem.

Growing in a greenhouse for the last nine years, Judith was recently transplanted in what Kibbutz Ketura calls the Ancient Judean Date Orchard. She’s the fifth such tree to be planted there after Methuselah, Adam, Jonah and Hannah.

“We are planting our second, female date tree, who was sprouted from an ancient seed. Actually, this one came from Qumran — was found in the caves — and much to our astonishment, she also sprouted,” said Elaine Solowey, the botanist who coaxed the seeds to grow.

Hannah was the first female tree. She was planted in 2019. Pollinated by Methuselah, Hannah had around 100 dates last year and this year she had more than 600 dates.

Sallon, a medical doctor, started this project more than 15 years ago after becoming interested in natural medicine.

“I wanted to see how medicinal the flora of Israel was and what it had been used for and so on. And then I realized that many of these species had actually disappeared. And we knew what there was, because it’s mentioned in the Bible. The Bible is our guidebook of ancient species,” Sallon told CBN News.

One that disappeared centuries ago was the Judean date. It’s mentioned in the Bible as one of the seven species found in the ancient Land of Israel.

“Now you say well, but we see dates all the way along here, palm trees and all the kibbutzim are growing plants. And I look at the plantations on Ketura. Those date palms of modern day Israel are modern and they were imported after the founding of the State in the 1950s. But they’re not the original date tree that grew here,” Sallon said.

Years ago at Masada, archaeologists found a jar of those ancient date seeds.

“In ancient times, the classical writers described in detail, the dates of ancient Judea. Why? Because they were famous. They were big; they were sweet. They were very dry. That allowed them to be exported all over the Roman empire and they had medicinal qualities,” Sallon said.

Sallon obtained five of those original seeds and gave them to Solowey. After devising a method to sprout them, Solowey succeeded in sprouting seeds found in other places such as the Qumran caves in the area where the Dead Sea Scrolls were found.

“I think the biggest problem is hydrating them because if you hydrate them too quickly, you kill them and you only get one crack at each seed,” Solowey told CBN News.

“So far, we have five males and two females seven altogether, and I’ve tried lots of seeds and most of them are deader than door nails,” Solowey said.

Fifteen years ago, the first tree Solowey sprouted was a male. They called him Methuselah after the oldest person in the Bible. CBN News got its first look ten years ago when Methuselah was still in the lab.

More than 850,000 date trees grow in Israel. Solowey planted some three thousand of them on Kibbutz Ketura, where each tree produces around 350 pounds of dates a year.

And Solowey and Salone are hoping eventually to add the revived Judean dates to the harvest.

“We are going to be testing those dates in the future to see actually what they do and whether they differ from other commercial varieties of modern dates. So, for the kibbutz, it’s a big venture,” Sallon said.

Dr. Tareq Abu Hamed, Director of the Arava Institute at Kibbutz Ketura, sees this as

“If you don’t look back to the history you will not see the future. And here we are actually planting history at the Arava Institute. We hope that one day these trees that came from 2,000 years ago will be the hope of peace in our region,” Abu Hamed said.