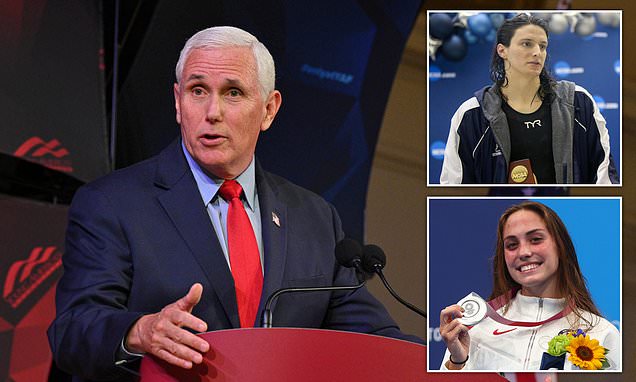 Mike Pence said it was time to defend the integrity of women sports during an appearance at the University of Virginia on Tuesday, saying UVA swimmer Emma Weyant had been unfairly deprived of a title by losing to transgender athlete Lia Thomas.

The former vice president was asked about the issue at the end of speech in which he blasted ‘woke’ campus culture and spoke out against attacks on freedom of speech.

‘Emma Weyant won that race,’ he said in response to a question about Thomas’ win in the 500-yard freestyle race at the NCAA championship last month.

Weyant, who took silver in the 400-metre Individual Medley at the 2021 Tokyo Olympics, placed second.

‘I know that in his State of the Union address President Biden promised to stand for the God given right of men to compete in women’s sports,’ said Pence, who has been quietly building a political organization for the 2024 presidential election

‘But common sense needs to reign and it will reign.’

He described women’s sports as a pathway toward achievement and excellence.

‘And we need to defend the integrity of women’s sports in America for the benefit of women everywhere,’ he said.