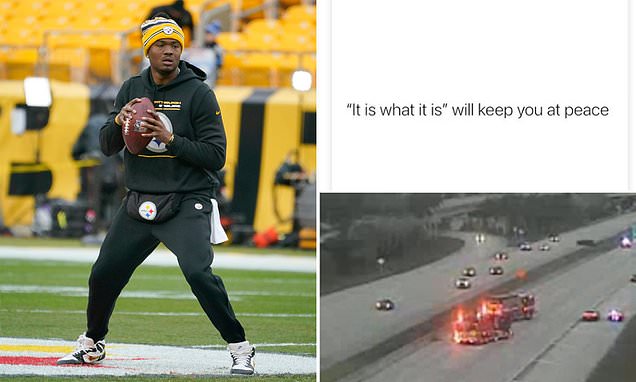 Pittsburgh Steelers quarterback and former Ohio State standout Dwayne Haskins made a chilling social media post sharing how he was ‘at peace’ just hours before he was struck and killed by a dump truck along a South Florida highway.

‘”It is what it is” will keep you at peace,’ the NFL player posted to his Instagram stories Friday afternoon after he revealed to his followers that he was hanging out with his teammate, running back Najee Harris.

Haskins, 24, was hit by the truck on Interstate 595 in Fort Lauderdale early Saturday morning as he attempted to cross multiple lanes of westbound traffic, state troopers confirmed to DailyMail.com.

He was pronounced dead at the scene shortly after 6:30 a.m.

Police said it remains unclear why the NFL player was walking along the highway.

Traffic Homicide Investigators have launched a probe into the crash, noting that no further details will be provided at this time.

Before Friday’s now-seemingly chilling Instagram story, Haskins last posted on his feed on March 30 from St. Thomas. He had been attending the Legends of Pittsburgh Cruise in which fans could interact with some of their favorite current and former Steelers players.