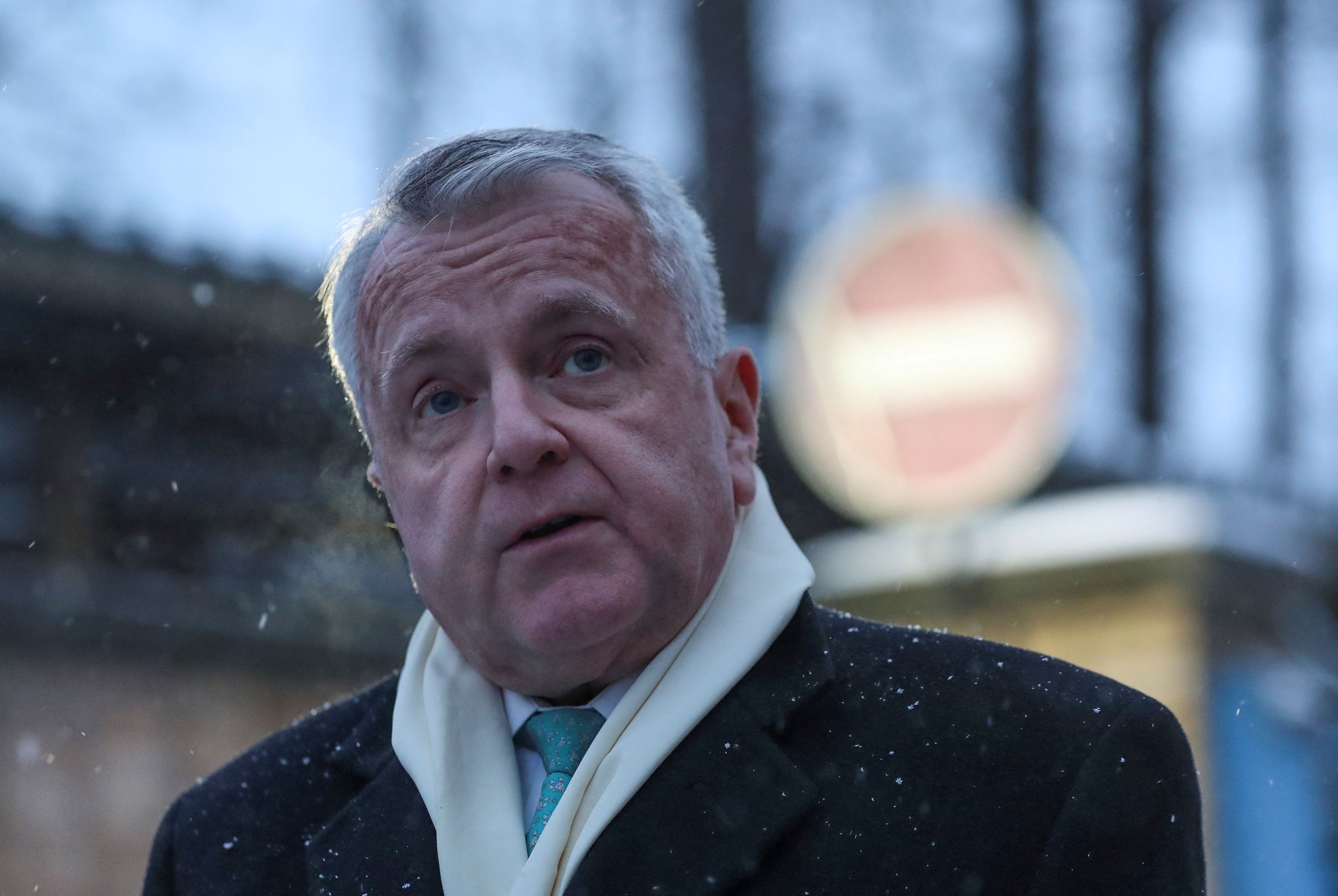 WASHINGTON, March 31 (Reuters) – Russia’s invasion of Ukraine has made John Sullivan’s tough job as U.S. envoy to Moscow even harder as he grapples with the Kremlin’s nuclear saber-rattling and threats to sever relations while keeping his embassy running on one-tenth the normal staff.

“It was really bad two and a half years ago,” Sullivan remembered of his arrival in Jan. 2020. “It’s gotten worse.”

Severe staff cuts imposed by Russia’s government have not yet forced him to clean embassy toilets or buff floors, as rumored in Washington, though he said he knows how to do both.

The loquacious grandson of Irish immigrants expounded this week in an interview about being Washington’s man in Moscow five weeks into a war in which U.S.-supplied arms are killing his host nation’s troops and sanctions imposed by the United States and its allies are devastating Russia’s economy.

Until now, he said, his meetings with Russian foreign ministry officials have “not been personally insulting or hostile,” nor has there been a serious backlash against the embassy.

“The security situation here isn’t that much different from what it was a month ago, six months ago,” he said via video call from a spartan office overlooking an embassy courtyard dusted with fresh snow. “But that could change at the discretion of the host government in a minute.”

Sullivan is dealing with circumstances that no previous U.S. ambassador to Russia faced, said John Herbst, a former U.S. envoy to Ukraine with the Atlantic Council think tank. “We are truly in a period of hostile relations with Moscow.”

U.S.-Russian ties already were at their post-Cold War iciest when former U.S. President Donald Trump tapped Sullivan for one of the most difficult jobs in U.S. diplomacy, one previously held by luminaries such as John Quincy Adams and George Kennan.

The rivals were engaged in tit-for-tat expulsions and a diplomatic visa feud, with Moscow ordering the closure of the U.S. consulate in St. Petersburg in March 2018. The consulates in Vladivostok and Yekaterinburg were shut after he arrived, leaving the embassy as the only operating U.S. mission in Russia.

But its staff has shrunk from some 1,200 in 2017 to around 130, about half of them Marines and other security guards.

The sides also were at odds over issues ranging from Syria’s civil war and the Kremlin’s seizure of Crimea and backing of separatists in Ukraine’s east to U.S. sanctions slapped on Russia for trying to sway the 2016 presidential vote to Trump.

As relations deteriorated, Trump’s Democratic successor, Joe Biden, decided to retain Sullivan, an establishment Republican lawyer who does not speak Russian but whose affection for Russia dates to his childhood admiration of the Soviet hockey team.

In April 2021, Washington recalled Sullivan for consultations after Russia’s envoy was summoned to Moscow.

Implementing a decree by President Vladimir Putin, the Russian government in May 2021 ordered the embassy to fire scores of Russian employees who performed critical tasks. That forced a halt to the processing of all but “life or death” visas.

Hopes that tensions would ease rose when Sullivan and Russia’s ambassador to Washington returned to their posts in June and Biden and Putin met in Geneva the same month.

But relations worsened. Russia massed troops on Ukraine’s borders, demanded sweeping security guarantees rejected by Washington and its NATO allies, and on Feb. 24 invaded its neighbor.

Russia says it is waging a “special operation” to demilitarise and “denazify” Ukraine. The war has killed thousands and uprooted millions.

Sullivan’s challenges span the ominous to the routine.

Days after he unleashed his invasion, Putin put his nuclear forces on high alert, citing aggressive statements by NATO leaders and economic sanctions against Moscow.

U.S. officials say they are concerned about veiled threats of nuclear war that they continue to hear from Russian officials, including comparisons to the 1962 Cuban missile crisis.

Sullivan said he takes seriously a threat “from the very top of the Russian government” to sever diplomatic ties, asserting that “The Russians don’t engage in rhetorical flourishes.”

‘CROWBAR TO PRY ME OUT’

Russia expelled Sullivan’s deputy in February and recently said another 37 U.S. staffers must leave by July. That would leave the embassy in “caretaker status,” secured by a skeleton contingent, one U.S. official said on condition of anonymity.

The embassy already has lost its elevator technician, meaning diplomats may soon be doing a lot of atlases, and keeping the sprinkler systems operating will become a serious safety issue if the last two electricians have to leave, the U.S. official said.

An increase in overnight calls with Washington as tensions mounted over Russia’s military build up prompted Sullivan in February to move out of Spaso House, the elegant ambassadorial residence, a 15-minute drive from the chancery and its secure communications facility.

He moved into the more modest Townhouse One, where his deputy lived before being expelled, which is a quick walk to the chancery, the U.S. official said.

If diplomatic ties were severed, requiring the embassy to close, Sullivan said he could no longer pursue one of his most pressing tasks: advocating for detained Americans.

They include basketball star Brittney Griner and former Marines Trevor Reed, who is staging a second hunger strike, and Paul Whelan, as well as an unknown number of others.

“I’ve told my colleagues back home, they’re going to have to use a crowbar to pry me out of here because I’m not leaving until, you know, until they either throw me out or the president just says, ‘Look, you gotta come home.’

Sullivan said he wants to “be here and at a minimum to advocate for those Americans that we’d leave behind iron bars.”