Trump Sues Hillary, Her Indicted Lawyer, Jake Sullivan, James Comey, Christopher Steele, and the DNC for ‘Crippling’ His 2016 Race by ‘Weaving a False Narrative He Was Colluding With Russia’ 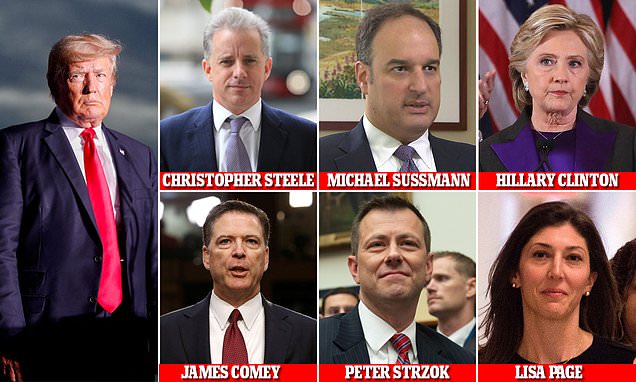 Donald Trump on Thursday filed a lawsuit against Hillary Clinton and a hit list of his favorite targets, alleging they tried to rig the 2016 U.S. presidential election by tying his campaign to Russia.

Among the names are Christopher Steele, a former British spy who assembled a dossier of alleged links between Trump and Russia, James Comey, the then director of the FBI who investigated possible connections, and the Democratic National Committee.

‘In the run-up to the 2016 presidential election, Hillary Clinton and her cohorts orchestrated an unthinkable plot – one that shocks the conscience and is an affront to this nation’s democracy,’ reads the complaint.

‘Acting in concert, the defendants maliciously conspired to weave a false narrative that their Republican opponent, Donald J. Trump, was colluding with a hostile foreign sovereignty.

‘The actions taken in furtherance of their scheme – falsifying evidence, deceiving law enforcement, and exploiting access to highly-sensitive data sources – are so outrageous, subversive and incendiary that even the events of Watergate pale in comparison.’

Trump, who beat Democratic nominee Clinton in the 2016 election, alleges racketeering, the theft of trade secrets, and ‘conspiracy to commit injurious falsehood,’ among other crimes.

The suit demands an unspecified amount of punitive damages.