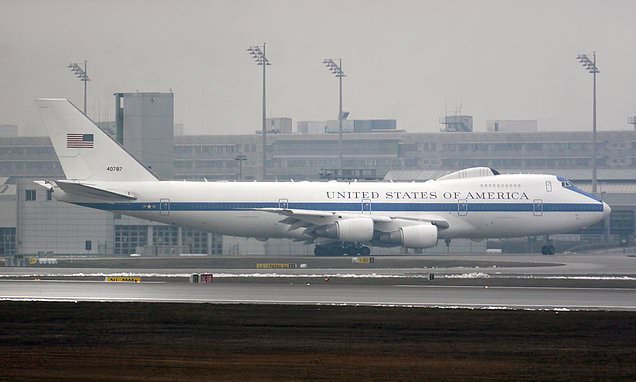 The US Air Force has sent it’s ‘Doomsday’ plane to Europe as part of a fleet of jets to support President Joe Biden’s four-day mission to bolster unity against the Russian invasion of Ukraine.

The E4-B Nightwatch is designed to be a command and control centre in the event of nuclear war.

The US keeps at least one of the fleet of four on permanent standby for immediate launch in the event of a nuclear conflict.

Earlier this week, a senior Kremlin official warned that Moscow reserved the right to use nuclear weapons if there was an ‘existential threat’ against the country.

One of the jets – which are based on a Boeing 747 and first entered service in the 1980s – flew to RAF Mildenhall in Suffolk yesterday, having refuelled midair while crossing the Atlantic.

The aircraft are designed to survive the electromagnetic pulse caused by a nuclear detonation and maintain contact with US military units across the globe to respond to a hostile attack.

The jets, which have been upgraded since their first deployment are able to pass orders from the president to US nuclear submarines and the country’s ICBM silos.

As a result, they have been described as the ‘Flying Pentagon’.