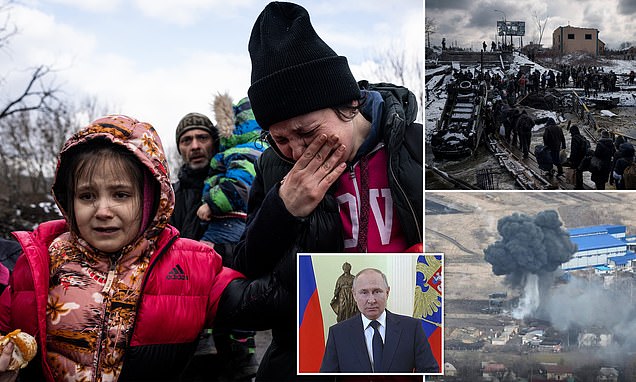 Kremlin officials are ‘privately denouncing’ Vladimir Putin’s ‘clusterf**k’ invasion as US officials warned that the isolated Russian despot could lash out in anger at Ukraine’s fierce resistance by using small nuclear weapons on some of its cities.

Russian journalist Farida Rustamova, who was well-connected in government circles before fleeing the country as the Kremlin launched a sweeping crackdown on dissent, has claimed that officials in Moscow never believed that Putin would go to war.

They are now allegedly making ‘apocalyptic’ forecasts about the weeks and months ahead as fighting grinds on and punitive sanctions bite.

When asked how Russian politicians were reacting to the crisis, one source told Rustamova: ‘They’re carefully enunciating the word clusterf**k. No one is rejoicing. Many understand that this is a mistake, but in the course of doing their duty they come up with explanations in order to somehow come to terms with it.’

Kyiv estimates that 12,000 Russians have now died fighting and while that number cannot be verified, casualties are almost certainly higher than Putin bargained for when he gave the order to attack 13 days ago. Captured soldiers have complained of a lack of food, fuel, and overall battle plan – with conditions set to get worse in the coming days.

A pronounced cold snap will see temperatures drop to -10C overnight in the middle of the week around Kyiv and Kharkiv – down to -20C when wind chill is taken into account – with many Russian soldiers stuck outdoors in a 40-mile column of stalled vehicles near the Ukrainian capital.