Daniel Whyte III Says You Can Take Tish Harrison Warren’s Advice and Pray for Putin’s Demise, but You Need to First Pray and Ask God to Forgive the Church for Endorsing and Sanctioning the Abominations and Sins That the Church Has Committed, Such as Homosexuality, Homosexual Marriage, and the Homosexual Agenda Which Was Intentionally Done Against God, Including the Protestant, Evangelical, Charismatic, and Catholic Church Has Sanctioned and Endorsed Even Joining With the Governments of America and Other Western Countries to Sanction and Endorse These Abominations and Sins, and Understand God May Be Using Putin to Rebuke and Chastise Ungodly Pastors and Government Officials in America and the West as God Used Evil Government Leaders in the Past to Rebuke and Chastise Israel. So You Can Pray as You Please, but Pray for Your Wicked Self Who Has Helped Put Us in This Situation. Whyte Warns Christians Everywhere to Be Careful About Joining the World’s Bandwagon Against Putin and Tells Them to Do What Dr. Tony Evans Has Said and Not Be on Anybody’s Team Because Christians Are the Referee and We as Christians Need to Deal With the Evil We Have Done Against God and Understand and Accept That We Are Being Rebuked and Chastised by God and Jesus Christ Because They Love Us. 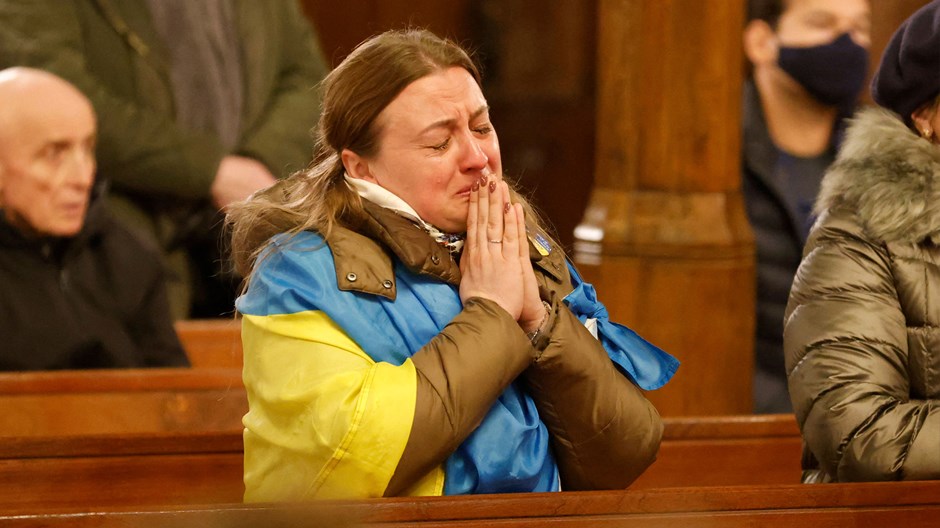 I saw an image last week that I cannot shake: a Ukrainian father gripping the face of his young son’s lifeless body, which is entirely covered in a blood-stained sheet except for a halo of blond hair. This grief-stricken father presses his face against his son’s hair, clinging to him, desperate and broken. I close my eyes to pray and I see this image.

When I think of it, I am heartbroken. But I also feel angry. I brush up against something like a maternal sense of rage. An innocent child was violently killed because Russia’s leader decided that he wanted a neighboring sovereign country as his own.

The violence in Ukraine makes me, like many of us, feel powerless. I watch helplessly as tanks roll into cities, as civilian targets are shelled, as the lives of whole families are viciously snuffed out. What do I do with this anger and heartbreak?

As I discussed recently with David French and Curtis Chang, I find myself turning again and again to the imprecatory psalms. Each morning I’m praying Psalm 7:14–16 with Vladimir Putin in mind: “Behold, the wicked man conceives evil and is pregnant with mischief and gives birth to lies. He makes a pit, digging it out, and falls into the hole that he has made. His mischief returns upon his own head, and on his own skull his violence descends” (ESV).

An imprecation is a curse. The imprecatory psalms are those that call down destruction, calamity, and God’s judgment on enemies. Honestly, I don’t usually know what to do with them. I pray them simply as a rote practice. But I gravitate toward more even-keeled promises of God’s presence and mercy. I am often uncomfortable with the violence and self-assured righteousness found in these kinds of psalms.