Daniel Whyte III Says in a Small Way Ukrainian President Zelensky Is Preparing the World to Be Ruled by a Jew, the Prince of Peace Jesus Christ 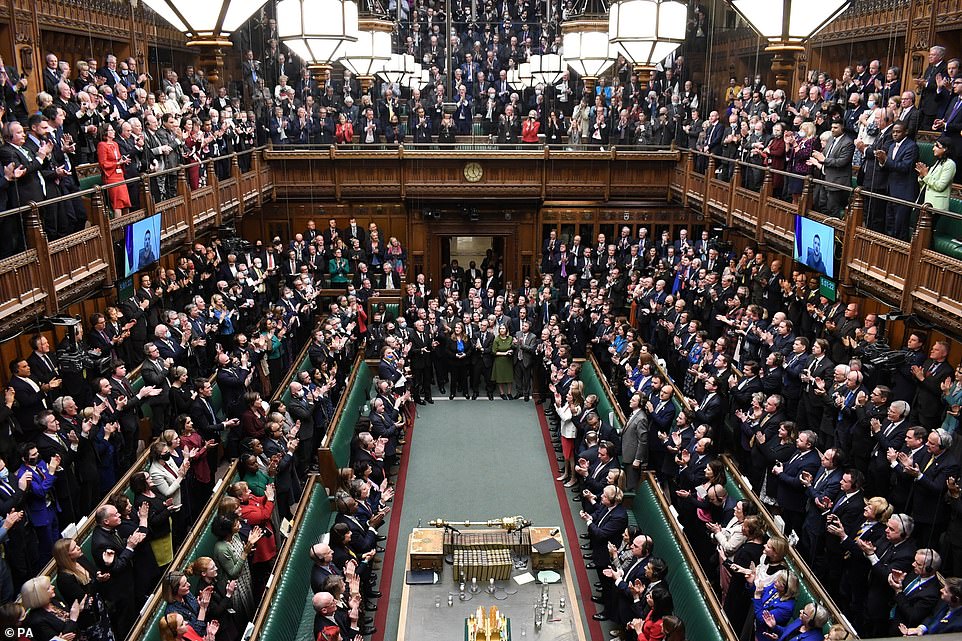 Ukrainian President Volodymyr Zelensky today channelled Winston Churchill’s wartime defiance as he delivered a historic address to the House of Commons from his war-ravaged country, vowing ‘we will not give up’.

Mr Zelensky was given a standing ovation by MPs both before and after his speech in which he compared Ukraine’s fight against Russia to Britain’s Second World War struggle against Nazi Germany.

Drawing on Churchill’s iconic ‘we shall fight them on the beaches’ wartime address in June 1940, he said Ukrainians will fight against Moscow’s forces on land, sea and in the air.

Mr Zelensky said: ‘We will not give up and we will not lose. We will fight to the end, at sea, in the air, we will continue fighting for our land, whatever the cost.

‘We will fight in the forests, in the fields, on the shores, in the streets.’

He said Ukraine was fighting a ‘war that we didn’t start and we didn’t want’ as he told MPs ‘we do not want to lose what we have, what is ours’.

Comparing Ukraine to the UK standing alone more than 80 years ago, Mr Zelensky said Ukrainians are fighting to save their country ‘just the same way as you once didn’t want to lose your country when Nazis started to fight your country and you had to fight for Britain’.

He also said more than 50 children have now been killed in the Russian invasion, telling the Commons: ‘These are the children that could have lived, but these people have taken them away from us.’

Boris Johnson responded to the address by telling MPs that ‘Britain and our allies are determined to press on with supplying our Ukrainian friends with the weapons they need to defend their homeland as they deserve’.