‘I Worry This Is All Heading to World War III.’ Ukrainian Americans in NYC’s ‘Ukrainian Village’ and ‘Little Odessa’ Neighborhoods Speak Out Against Russian Invasion as They Fear for Loved Ones Trapped in Their Home Country Under Siege 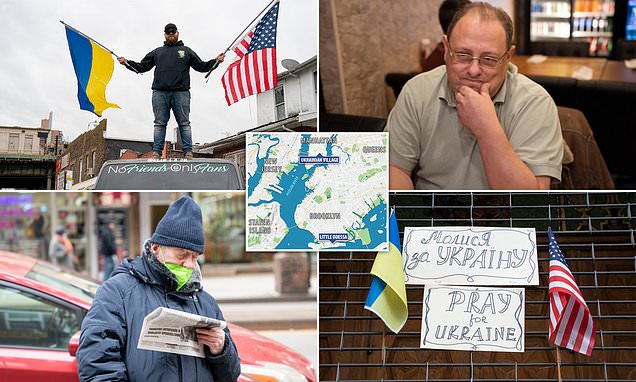 Ukrainian Americans in New York City are desperate to get in touch with their loved ones overseas as Vladimir Putin’s Russian army invades their home country.

New York City is home to more than 150,000 Ukrainians, the largest concentration in the country, with the majority now railing against the deadly occupation.

The biggest clusters of Ukrainians are in Manhattan’s East Village, an area known as Ukrainian Village or Little Ukraine, and in Brighton Beach, where so many ex-Soviets emigrated that it earned the nickname Little Odessa, after a Ukrainian city on the Black Sea.

The neighborhoods saw an influx of immigrants from Eastern Europe after World War II, then experienced another wave in the mid-1970’s when Ukraine was still part of the Soviet Union.

On Thursday, DailyMail.com visited Brighton Beach, a waterfront community in the southernmost reaches of Brooklyn, where anxieties were running high along the boardwalk and in shops as residents fixated on disturbing images out of Ukraine.

They told DailyMail.com along the bustling commercial strip that they worried about the impact of the Russian invasion, the potential for WWIII and their family and friends who are stuck in Ukraine.