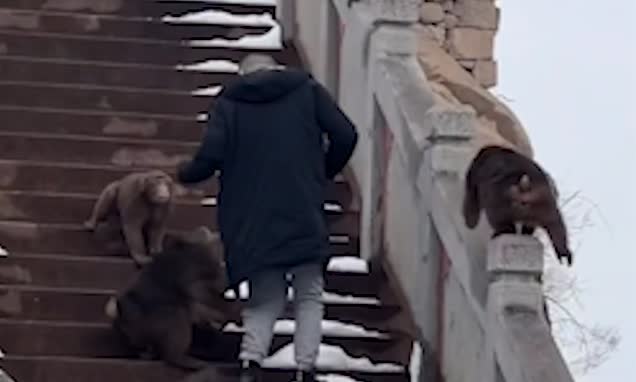 This is the moment a tourist was mugged by begging monkeys looking for food as he visited a temple in China.

Footage recorded at Mount Jiuhua, near the city of Chizhou in the south of Anhui province, shows a young man ascending a flight of stairs towards a temple.

The tourist hotspot, famous for hosting several Buddhist temples which are open to the public, has become infested with shameless monkeys that try to exact a tasty ‘toll’ from visitors.

In the video, the monkeys can be seen sitting on the snow-covered steps leading up to the temple.

One young man, who was reportedly with a group of tourists, decides to brave the primates and venture up to the temple.

But he is surrounded by five menacing monkeys and lets out a horrified yell as one of grabs his arm, threatening to throw him off balance on the slippery steps.