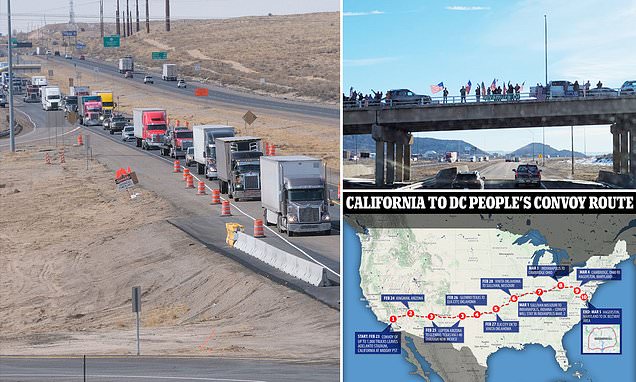 The People’s Convoy, which has raised nearly $1 million in donations, flooded a New Mexico highway Friday as the scores of truckers protesting COVID-19 mask and vaccine mandates entered day three of their cross-country trip to Washington, D.C.

A photograph taken by convoy leader Mike Landis shows the group, comprised of approximately two dozen semi-trucks and about 100 other vehicles, traveling eastbound on I-40, about 15 miles west Albuquerque near the Route 66 Casino, in a motorcade that the convoy said spans eight miles.

The People’s Convoy, inspired by Canada’s Freedom Convoy protest, raised more than $855,000 in monetary donations as of Friday, according to the protest’s website – nearly double the amount it reported Thursday. Vendors along the route have also donated gas, food and other essentials to the cavalcade.

The convoy started its 11-day trek from California to the nation’s capital on Wednesday and, despite facing a weather delay Thursday, is still expected to arrive in D.C. on March 5, where it will be joined by around 25 other truck cavalcades.

The truckers have called on President Joe Biden to end the National Emergency, which was enacted at the start of the pandemic in 2020 and was extended again last week. The group, arguing that the threat posed by the coronavirus has now receded, also seeks an end to ‘unconstitutional’ vaccine and mask requirements.