Now Putin Plays the Peacemaker Amid Doubts Over His Theatrical ‘Withdrawal’: Russian Strongman Claims He ‘Of Course Doesn’t Want War’ but Accuses Kiev of ‘Genocide’ – as West Warns He Is Still Plotting Invasion 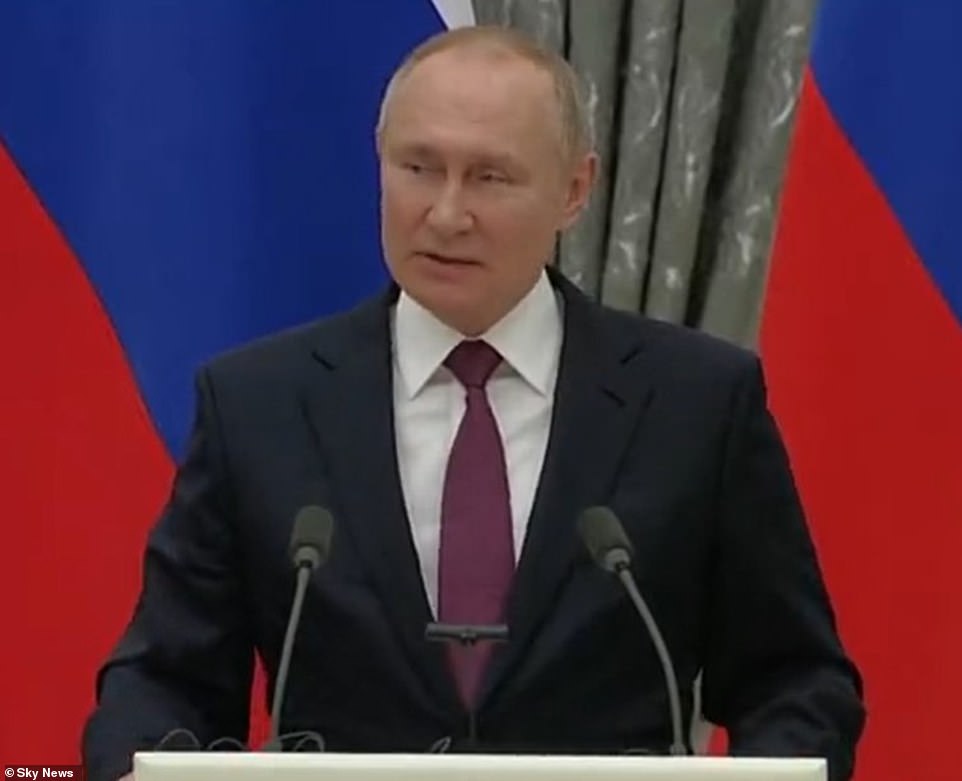 The strongman, speaking at the Kremlin alongside German Chancellor Olaf Scholz, said he is ‘ready to go down the negotiations track’ and engage over issues such as arms control, transparency around military drills, and other measures aimed at reducing sky-high tensions between East and West.

Russia’s apparent withdrawal is being treated with extreme scepticism in the West, where intelligence agencies suspect is could be part of a ruse to launch a smaller military operation in the regions of Eastern Ukraine where Russian separatists are fighting.

Putin also insisted that the fate of two breakaway Ukrainian regions – where Moscow-backed rebels are fighting the government – should form part of talks because ‘genocide’ is underway there. And he again accused the West of ignoring his demand that Ukraine is banned from NATO, underlining how far apart the two sides still are.

‘This is exactly why we put forward the proposal to start the negotiation process where the result should be an agreement of ensuring equal security of everyone, including our country.

‘Unfortunately there was no constructive response to this proposal.

‘Nevertheless we come from a position that even in the documents that were forwarded to us from NATO and Washington there are elements that can be discussed.’

Hours before he spoke, Moscow announced that some troops and tanks stationed near Ukraine are being returned to their home bases – a move that was welcomed with cautious optimism by Western leaders who said it sends the right signal, but doesn’t change the fact that Russia could still invade at short notice.

Boris Johnson accused Putin of sending ‘mixed messages’: Calling for negotiations on one hand while building field hospitals on the frontlines, a move he said ‘can only be construed as preparations for an invasion.’

Jens Stoltenburg, NATO chief, said he has seen no evidence that Russia is drawing down its forces but that signals coming from the Kremlin give room for ‘cautious optimism’.

Ukrainian defence minister Dmytro Kuleba credited Western efforts to avert war as the reason for Moscow’s change of stance, but added: ‘Don’t believe what you hear, believe what you see. When we see a [Russian] withdrawal, we will believe [it.]’