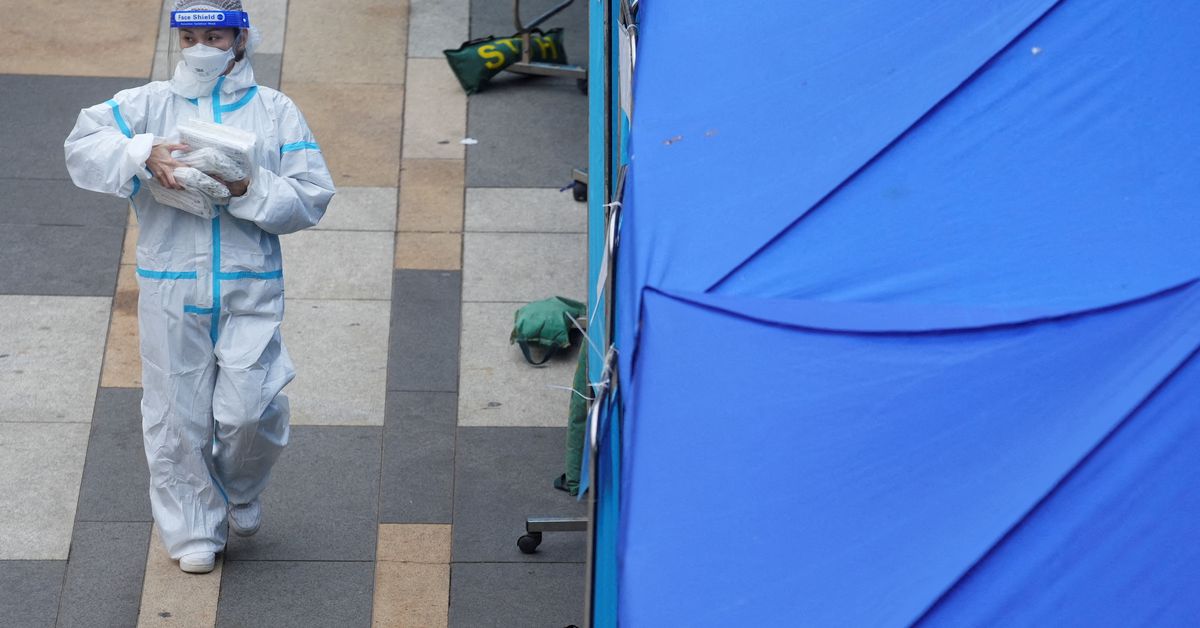 HONG KONG, Feb 14 (Reuters) – Hong Kong’s is being overwhelmed by the “onslaught” of COVID-19 infections, its leader said on Monday, although deaths in the Chinese controlled global financial hub remain far less than similar-sized cities since the pandemic erupted two years ago.

Daily infections have multiplied 13 times over the past two weeks, from about 100 cases at the start of February to over 1,300 on Feb. 13, with authorities scrambling to control the deepening outbreak.

As the caseload soared, Hong Kong’s leader Carrie Lam issued a statement on Monday saying her administration would coordinate with Chinese officials to tackle the “aggravating situation”.

China has said it would help the city with testing, treatment and quarantine, and secure resources from rapid antigen kits and protective gear to fresh vegetables.

The city is due to report at least 1,530 COVID-19 cases on Monday, broadcaster TVB said, citing an unidentified source. It would be a new record for daily cases.

“The onslaught of the fifth wave of the epidemic has dealt a heavy blow to Hong Kong and overwhelmed the city’s capacityof handling,” she said, adding patients were having to wait longer to access isolation facilities.

“The situation is highly undesirable and the government feels worried and sorry about it,” she said.

With the healthcare system already overstretched, medical experts warn the city could see 28,000 daily infections by the end of March, with the unvaccinated elderly a particular worry.

Hospital beds for COVID-19 patients are already at 90% occupancy, data from the city’s Hospital Authority showed, while isolation facilities are near full capacity. read more

Hong Kong is prioritising elderly, children and those in serious conditions in hospitals, said Larry Lee, chief manager at the city’s Hospital Authority.

For all the alarm over the latest wave of the pandemic, Hong Kong’s total caseload since the pandemic first erupted was around 24,000 infections, including more than 200 deaths, less than many other similar major cities.

Lam said authorities would “spare no effort” to implement the “dynamic zero” coronavirus infection strategy in Hong Kong, which, like mainland China, seeks to curb outbreaks as soon as they occur, in contrast with many other places that are trying to live with COVID.

Inside the city, residents are banned from public gatherings of more than two people while most venues including schools, churches and gyms are all shut. Dining in restaurants is banned from 6.p.m local time and most people are working from home.

Strict flight restrictions have turned Hong Kong into one of the world’s most isolated major cities with its borders effectively sealed for around two years.

The city’s Legislative Council is due to discuss the injection of HK$27 billion ($3.46 billion) into an anti-epidemic fund to support businesses and individuals affected by the city’s stringent social distancing measures, the government said in a statement.