Blockbuster Nor’easter on Track to Bury Boston With Heavy Snow 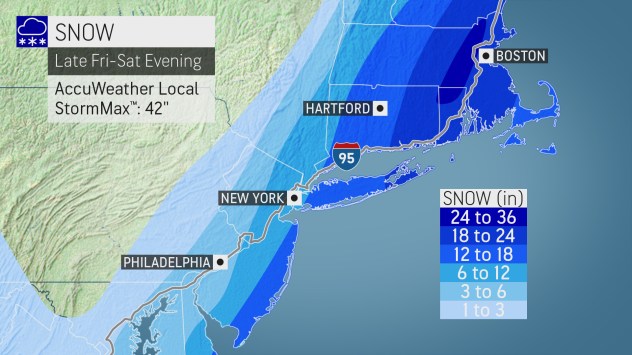 Winter storm watches were issued between Wednesday afternoon and Thursday morning from the mid-Atlantic to southeastern New England in advance of a nor’easter that is set to charge up the East Coast Friday night into Sunday. As it chugs along, the storm will strengthen into a bomb cyclone and a full-blown blizzard will ensue in eastern New England.

The first winter storm watches were issued for portions of eastern Massachusetts, eastern Connecticut and Rhode Island on Wednesday at 3 p.m. — some 57 hours before they were set to go into effect at 12 a.m. on Saturday.

By Friday morning, the watches had been upgraded to warnings in Connecticut, southeastern New York, including New York City and Long Island, much of New Jersey, southeastern Pennsylvania, including Philadelphia, and much of the Delmarva Peninsula.

For the Jersey Shore, including Atlantic City, New Jersey, southward to the Delaware Beaches, a blizzard warning was in effect.

The winter storm and blizzard warnings were due to go into effect at 7 p.m. Friday evening and last through 7 p.m. Saturday evening.