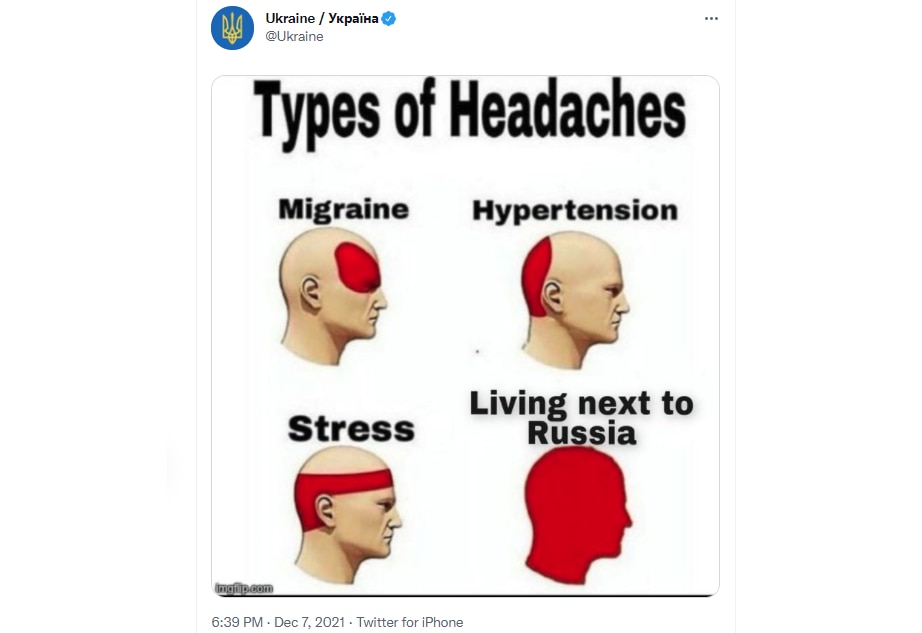 KYIV — With some 100,000 Russian troops and military hardware massing near Ukraine’s border, Ukraine has deployed a force of its own: a state-run Twitter account mobilizing memes.

The address @Ukraine has become a sort of window into Ukraine’s zeitgeist — ups, downs, fears and plenty of dark humor — amid claims by Western leaders that Russia could be planning a large-scale invasion.

While some citizens have started considering evacuation plans, people are largely calm and say they’ve grown used to worrying about war with Russia over the past eight years — since Russia’s invasion and annexation of Crimea and conflict between Ukrainian forces and Russia-backed separatists in Ukraine’s eastern Donbas region.

On Dec. 7, @Ukraine’s tweet describing types of headaches — the punchline was that “living next to Russia” is the worst kind — was shared more than 140,000 times. Social media posts across the globe cheered that a country’s official account had personality, rather than the typical dry posts from government image-builders.

The mastermind(s) behind the current @Ukraine Twitter feed declined to go public, preferring to keep out of the public eye and agreeing to an interview only through Twitter messages with The Washington Post. (The account is verified.)

“Imagine a truly good person who’s been [through] a lot in the past, managed to overcome hardships and developed this very special type of sassy and darkish humor as a byproduct. This is what Ukraine is about,” said the account said in a message. “We laugh in the face of threats not because we underestimate them, but because what else should we do? Laydown and cry? Tears have never won anyone freedom.”