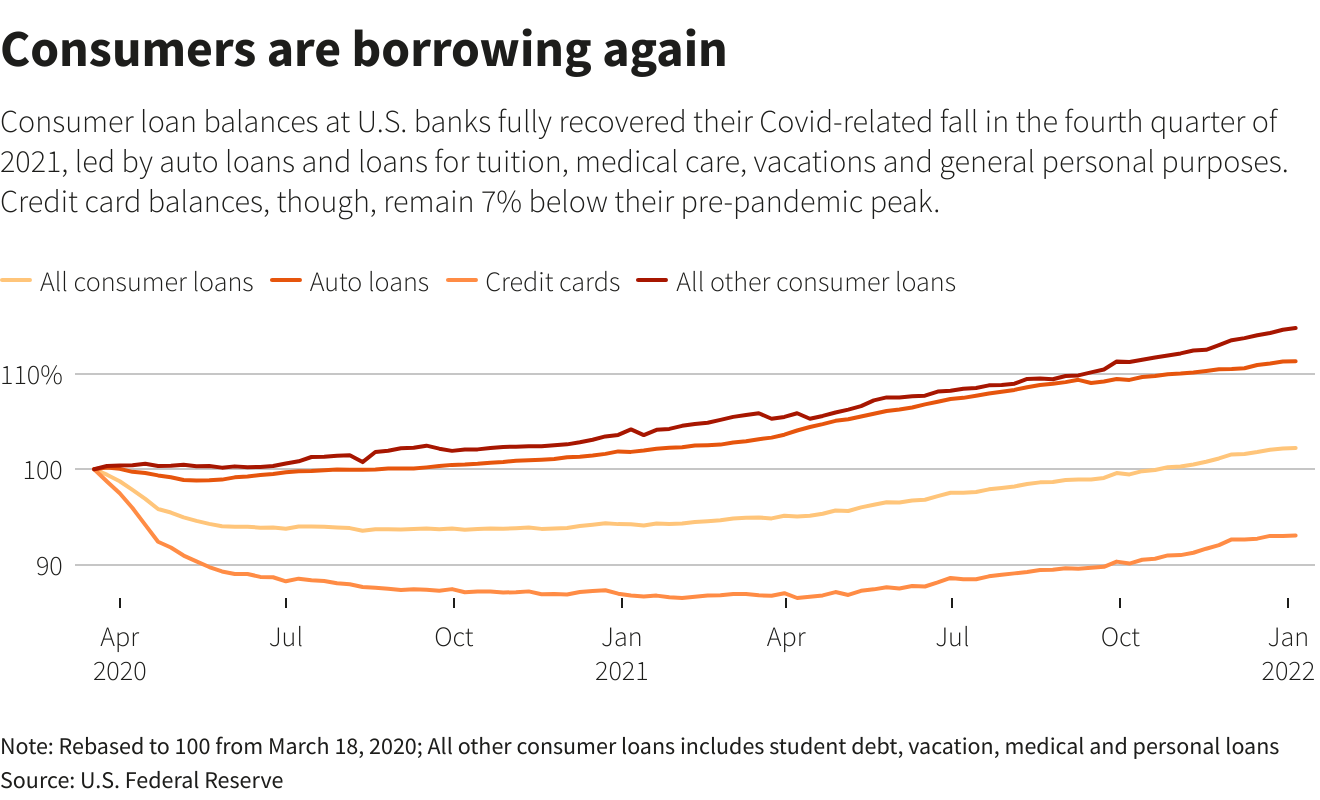 NEW YORK, Jan 20 (Reuters) – Top executives at the biggest U.S. banks have been optimistic about the nation’s economic outlook this earnings season, pointing to healthy consumers who have cash in the bank, are again eager to spend and also to borrow.

Consumer spending, a key driver of the U.S. economy, fell sharply during the start of the pandemic as Americans, fearing the worst, hoarded cash and saved money by staying at home.

At the same time, government aid padded many Americans’ bank accounts, and many used the cash to pay off debts.

Now, JPMorgan Chase & Co (JPM.N) and Bank of America (BAC.N), the No. 1 and 2 largest U.S. banks which together reach around 140 million households, say consumers are in good shape, even if the Omicron variant dampened spenders’ enthusiasm some late last year.

Some analysts also cautioned inflation had the potential to further dampen spending if it continues.

Bank of America, which provided the most comprehensive consumer spending data when it reported earnings on Wednesday, said its 67 million customers spent a record $3.8 trillion in 2021, a 24% increase from 2019, the pre-pandemic benchmark.

That figure includes all the ways in which the bank’s customers spend money – credit and debit cards, ACH, wire transfers, cash, checks and money sent via platforms like Zelle.

Fourth quarter payments were up 28% on the same period in 2019, also a record jump. Spending has continued into January, with payments up 11% as of Jan. 17 compared to the beginning of January 2021, Bank of America said.

Nearly all customers’ account balances grew from June to December, it added.

“We believe there’s lots of potential spending capacity left as average deposit balances continue to move up to the end of the year despite the heavy spending you see,” Bank of America Chief Executive Officer Brian Moynihan said on Wednesday.

Wells Fargo & Co said credit card spending and median account balances for the fourth quarter were both up 27% compared to pre-pandemic levels.

Consumer loan balances across the industry also fully recovered from their COVID fall in the fourth quarter, led by auto loans and loans for tuition, medical care, vacations and other purposes, according to Federal Reserve data.